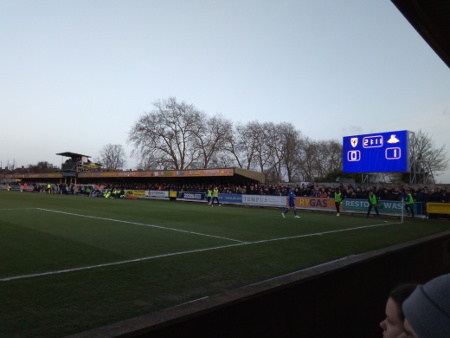 Ah, football. Such a complex mistress…

Breathe it in everyone, we won. And I think we might have almost deserved Dons 2 Dons 1, if only for the sheer cheek of it.

To win a game after being that shit in the first 45 minutes takes some level of chutzpah. That we were losing (and the photo above gives you a sense of the rapidly evaporating hope) didn’t really help the recent mood.

Indeed, the team on the field reflected the club off it – directionless, a painful lack of quality and only a matter of time before it got its pants pulled down yet again.

Look up the word “grim” in the dictionary and you’d have the report of this game in it.

That said, when you’re only a goal down, it really does take a moment for something to happen and change things. That happened to our possibly-flying-off Finn, who not only won the penalty but showed the rest of the team how to convert it too.

And yes, we looked different afterwards. Remarkably so.

Even so, I was still (pleasantly) surprised when we got the winner, thanks to Forss again and this time Reilly slotting home. To be honest, I thought we were going to balls it up, and at so many other times this season, we would have done.

I’d like to say that I knew we would win after that. In truth, I was pretty much expecting Doncaster to equalise, although this time we managed to hold on quite resolutely.

The difference a week makes.

I don’t think we’re a particularly good side, but providing we can keep any damage in January down to a minimum there’s enough there to suggest we could get out of this after all. Something I wouldn’t have said even a month ago.

And really, isn’t football just partly what’s between the ears anyway? How we would have reacted if we went 2-0 down I don’t know, and I’m glad I didn’t find get to find out.

But credit to everyone who played (including Rudoni, who was making his debut), for digging themselves out of the whole they created themselves. It will be a nice weekend for us, and it should be a decent one for them too…

Plus points: We won. Coming back. Forss. Reilly. The sudden ability to defend.

Minus points: Their goal. Still too little quality.

The referee’s a…: Wasn’t he the guy who sent off Forss against Brizzle Rovers (?). Never mind, apart from a couple of times he managed to ignore Donny players falling down, he managed not to annoy me.

Them: Mid-table, and it just reconfirmed to your editor that a lot of League One isn’t all that.

Definitely pissed all over us in the first half, deserved their lead, but weren’t good enough to kill us off. Even we couldn’t gift them another goal like we did the first one.

When we went ahead though, I didn’t think much of them – even the pummeling didn’t really make us crack.

Decent turnout from them, over 400, especially just before Xmas. I wonder how many we’ll take to the Wirral next weekend…?

Point to ponder: How important is January proving to be already?

We can safely assume that Forss will be returning to Griffin Park, and therefore the need to replace him ASAP becomes urgent. We won’t stay up if we don’t.

Anyone else departing remains to be seen, although I can’t see anyone willing to shell out money on anyone. Not unless Salford City have a brainfart and offer money for Pinnock, or somebody decides Osew is worth a couple of quid.

Obviously, it doesn’t need repeating what a big test it will be for Hodger, but he has the guy with the database beside him now, and it’s not like either of them had zero influence in transfers this past twelve months.

Whoever we get in will likely be u23s, as I doubt whatever budget we have will stretch beyond that. Not that you can’t pick up good players from that level – Forss is from that setup, ditto Sanders and they’ve impressed more than certain senior players.

Another one or two of that caliber won’t go down badly.

You would assume that Hodger himself has enough contacts within that particular sphere, especially as he was at Stoke u23s until January last year.

He will probably need to move sooner rather than later, although I bet he’d love a phone call from Thomas Frank saying that Forss is better off staying with us…

Truth is stranger than fiction: 1) The car with all its windows smashed in, in the driveway on the corner of the Kingston Road entrance. Somebody must be very upset with their parking. 2) “Come on Dons, we can still draw this” – comment heard after we went 2-1 up. Sad thing is, we all believed it. 3) I didn’t know there was a new verse of the Champagne Song.

Anything else? OK, the “other” issue, and right now I’m not sure if there’s any point going over well-trodden ground at the moment.

We still don’t know who the potential investors are, and we may not find out until the New Year. Which kind-of makes sense, even though time is tighter than people think, because nobody will be paying much attention over Xmas.

I didn’t go to the KM meeting on Monday, partly due to the chest cough/infection I’ve had this week, and partly because it was likely to be full of those who were upset at the General Election result.

Perhaps as a result, Joe Palmer did write something in the programme today, which I’m sure will have placated some. True, it’s a bit PR-ish but we’re a club that has been too poor at that for too long.

As said on here in recent updates though, our options are likely to narrow quite quickly as their workability become ever more apparent.

The proposed bond might get a few sheckles, though I suspect it won’t raise as much as the proposers hope it will. Not only because it’s a very expensive time of year, and the spending power of a majority of fans is always limited, but how many who could fund it won’t touch anything AFCW related?

I’ll be honest – I wouldn’t want to put any more into this club right now than a cup of tea, because I’ve lost faith whether I’d see my money again. Christ, I’d be tempted to ask for my £50 Seedrs money back, on the basis I think I’d spend it better.

The various proposals are one big scramble though, probably because the potential of external investment has spooked some. As said on here when it all first blew up though, that’s become a matter of time and nothing has changed my view.

Even if we do raise £11m through some fans donating kidneys to Chinese organ harvesters, it’s only going to kick the obvious funding issues down the road. Get NPL done may be a good slogan, but it won’t end there.

The way the whole club is structured, and how it does things is for another time, although the DTB didn’t seem to come out of Monday too well (maybe that is why JP wrote what he did?).

The emphasis right now is on working together for a solution, whatever it turns out to be, but the past fortnight has IMO become a watershed.

Get through this, and our fanbase will be more cynical, less naive, less trusting, more worldly wise, and a lot more educated in what the cruel, adult world of professional football is really like. We will be much better off when we do, but we just have to get through it first…

So, was it worth it? Yes indeedy.

In a nutshell: Shame Franchise won.