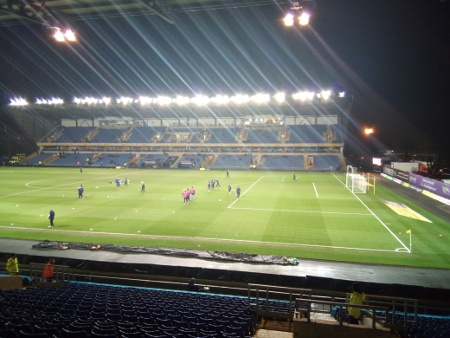 Shall we quickly move on and pretend last night didn’t happen?

I suppose if you’re going to try and grasp any sort of positivity from Joy Riders 5 Joy Division 0 whatsoever, it’s that we rarely get stuffings like this.

I’m also hoping – not expecting, unfortunately – that this was a mixture of us drawing against Ipswich and Rotherham, and your editor’s warning about Oxford in the last SW19 update.

Yes, I’ve already had people reminding me what I said. I wasn’t wrong, unfortunately.

The odd gubbing per season is part of football. But make no mistake – repeat this too many times and we’re in League Two next season.

And really, there isn’t any hope of trying to find any other redeeming features about this game. Maybe the first 10-20 minutes were OK, but we were doing too much defending even then.

They scored, which was a bit too easy. Then a few minutes later they scored again, a task so simple that it made their first goal look like solving a Sudoku puzzle.

At least when you’re 2-0 down, there some chance you can still get back into the game. And I suppose there were some who believed it, like those who believe in fairies at the bottom of the garden, or the concept of lifelong Franchise fans.

Just as neither of those two ideas exist in real life, neither did any thought of a heroic comeback. They scored a third, and I think we should have all buggered off home after that.

Weirdly, we actually started to attack a bit more. Whether it’s because Oxford decided their work was done for that evening I don’t know, but it fucks me off when a team starts doing that.

Oh, they scored a fourth. Like you cared by that stage.

I’d like to say that their fifth in injury time was a little bit harsh, but it wasn’t. Had it not been for Day, it could have easily been eight or nine, and that’s not much of an exaggeration.

True, being without Reilly, Wagstaff and the increasingly forever-crocked Wordsworth didn’t help. And I can accept that we (hopefully) won’t play as badly again this season.

But this was rancid turd, and then some.

Hodger apologised to the fans afterwards, although one wonders what he really said to the players afterwards.

You would expect to bawl them out in public, but having sat through more post-game interviews than I care to remember, managers never seem to do that. Unless things get really bad, that is.

I’m sure it’s nice to hear that we’ll put it right for Blackpool on Saturday, because the alarm bells will start ringing if we don’t. Especially if Tranmere find some form.

Plus points: At least I got home without too many holdups.

The referee’s a…: Annoyingly not too bad. Though even if he was, it would be serious straw clutching to have blamed him for all five goals.

Them: Didn’t play much different to how they played against the Mackems, but last Saturday they were up against a team who knew about the concept of defending.

From memory they had only won 1 game in their last eight before last night, so AFCW once again helps out another team in distress. Aren’t we nice?

Bet their manager enjoyed the game, anyway. Seriously, he’s a bit of weird bloke anyway, and somebody who I wouldn’t be surprised to eventually get done for something like fraud.

Oxford must be one of the teams we’ve played the most in the AFCW era, there was certainly a familiarity to facing them. Even down to seeing lots of people in blue/yellow scarves and then realising they don’t support us.

Oh, and I think I say this every time I come to the Kassam – I’m so glad that NPL (and even KM to an extent) is in a built-up area where you can at least walk into the nearest town centre.

Leaving aside their ghostly fourth side, the biggest barren space in the ground apart from our defence, it’s not actually a bad stadium. That they’re talking about moving tells its own story…

Point to ponder: Dare we talk about the “R” word yet?

I have to admit, if we do find ourselves in L2 next season, you wouldn’t entirely be surprised. No, I hope we don’t, and I don’t believe GH should be the first manager of the AFCW era to suffer that fate.

And yes, our fate is still in our own hands. For now, anyway.

Last night though, we played like a side that would struggle to avoid the trapdoor to non-league.

Our attack has long been an issue, but now our defence looks ever more brittle. While we won’t play teams with a point to prove (like Oxford) every week from now on, we’ve still got some toughies ahead.

True, I’m writing this after our previous two games yielded two points (against two of the top six, no less), but results like these can damage a club’s confidence quickly – and possibly fatally.

It might be a tad hyperbolic to say that the next couple of games will make or break our season, but we need a reaction from last night PDQ.

Truth is stranger than fiction: 1) One of our number buying a burger that was cold. Got a refund, but said food item was last seen in our midfield. And playing better than anyone else. 2) “We need a bond to buy some players” – somebody behind me when we went 4-0 down.

Anything else? Last night serves as a reminder that ultimately, everything at a football club is determined by what happens on the field of play.

Sure, there’s been a lot of (self) congratulation over the PLB, and right now we’re in an unusual situation – namely, it’s off the pitch that matters most of all this season.

But that won’t last forever, and indeed if/when the loan for NPL is sorted, we re-focus on what happens in games again.

And results on the pitch will be the main catalyst for the future direction of the club, because it’s the one thing everyone is interested in.

It sets the mood like no other – compare your emotions after Rotherham and against last night, and you’ll see what I mean. Not so much a spring in your step this morning, somehow.

We can kind-of get away with it for the rest of this season, because we’re about to embark on the biggest change we’ll make since 2002 next campaign.

But from next season onwards, we’ll have to prioritise improving the squad – no matter how we do it.

Why? Because trying to get existing fans to watch yet another season of crap is going to be harder. Especially as the level of expectancy grows with the new place that is supposed to help us with transfer budgets.

And good luck trying to keep new fans interested if they’re served shit on a regular basis. No matter how nice the beer is in the new club bar…