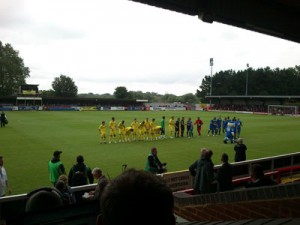 So, the first pre-season of the new season. A time to gather your thoughts for the new season ahead. A chance to reaquaint yourself with the route to the ground, people you know, people you haven’t seen in a good while (and in some cases don’t particularly want to see), the smells, the sights, the sounds, and to get excited about new players. In fact, there’s only one word to describe this very happening today.

And yes, it’s only the first pre-season, against a team that won the Championship last season, who are on a high, buzzing, against a brand new side that barely knows each others’ names yet.

But even with all that in mind – ouch.

Or perhaps today has been one massive favour? It’s only pre-season after all, and these sort of games are forgotten pretty quickly. For the first half, we didn’t look too bad – granted, it looked an iffy penalty, and there’s plenty of ring rust. But the two triallists at centre back may be worth looking at again. A few of them were full of energy and had a point to prove, and we might have been a bit unlucky to have been 2-0 down at the break.

Unfortunately, the second half showed what happens when you put up a decent enough second string Prem/Championship side against a mixture of League Two (if that) level kids and triallists.

Will we see Ben McNamara again? Hard to say. Thing is, even if a couple of goals weren’t his fault when you get the home fans sarcastically clapping when he catches the ball that’s not good. He didn’t exactly give out the confidence one expects from an Australian, and he may be very lucky to get another game with us.

Which kind of already puts us in a bit of a predicament, although none that deep down we didn’t already know. When we go to Stevenage, a starting XI of Brown, Osano, Cummings, MMK, AN Other CB, Sammy Moore, Stacey Long, Jolley, Midson, Harrison and Toks will be passable (excuse any lop sidedness). Maybe Kiernan (if his move to Barca falls through) and Luke Moore could come off the bench if need be. A couple of the youngsters may well grow into the role.

But today seemed to suggest that already, we’re a bit short in the squad. Maybe we’re waiting for some season-long loans to get done, but as we all know, clubs loan out players and expect them to start. We can’t start benching them a la Hoyte.

We do have five weeks to sort that out, and by the time PNE come down to KM I expect a fitter, mentally sharper and more cohesive unit to be wearing the Batman logoed shirt. A shirt which by the way still takes getting used to – it would have been better if that was just blue.

Which is why it’s difficult to take much more away from this game. It hurts to lose by seven goals, and no matter what stage of the season you’re at, your pride does get dented. We’re certainly not going to face that level of side again, unless we draw them in the cup (and by that time I would hope to be much more settled).

And you can start pointing to the first half and how it held its own for a lot of the time.

Anyway, we’re back playing games on a Saturday again, and I expect not to have this scoreline against us again all season. Though that of course will be famous last words…

Plus points: Showed a little bit of promise in the first half. Seb looked slimmer. Centre back pairing of Downes and Old may be worth looking at again.

The referee’s a…: It’s pre season for us and for him too. But he gave a dubious looking penalty, so he’s a cunt for that alone.

Them: They might do all right in the Prem next season, even on this initial showing, as they look a cohesive unit. Teams who have won titles the season before and who haven’t been dismantled have that feel about them. Of course, if they do badly, the Prem may be even more of a gap than we first thought.

Decent turnout of 637 from them, including all those in the Main Stand. Mind you, it’s not that far from Reading to KM, and it kind of reminds me of the days we used to go to the Manor Ground at this time of year and compete for the Oxfordshire FA Challenge Cup or something. Think that “We’re gonna win the League” from them was a bit optimistic though…

Point to ponder: It’s pre-season, so there isn’t a lot else bar the usual rejigging of the squad. One thing though – while I appreciate it’s part of the Jason Prior deal, there’s something in the back of my mind about how much we will really get out of Maidenhead and Bognor this next seven days.

Fortunately, we haven’t found ourselves doing the Conference South/Ryman League nostalgia tour like last season ended up being (did we really use valuable pre-season time to play T&M and Beckenham?), and PNE and Pompey and Woking will be good testers. But after a defeat like this, the confidence will be boosted if we play a Conf or L1 side and perform far better…

Truth is stranger than fiction: (1) Your editor’s first game in the KM press box since Gillingham. Even though I’ve done journalism for six years now, it’s still a weird feeling watching our games as a “neutral”. Especially as my task today was to interview a Reading player. (2) Sitting just two seats along from your editor? One M Tyler, he of Sky Sports commentary legend. Very nice bloke as you can imagine, and seemed more than happy to talk to WDON at half time. Where apparently he said something about Franchise. (3) The new Historical Don fanzine. Looks a promising publication, and is different (and probably less likely to be divisive) than the other two publications on the market. Did notice the 1919 photo with the big “W” on the shirt. Perhaps we ought to bring it back…

Anything else? I wonder if we’re about to embark on one of the most important seasons for some time? Don’t get me wrong, every season is important, but AFCW faces a season where it now has to step from naive schoolboy standing in headlights to something resembling that of a Football League club.

Anyone who puts their hand on their heart will know that it’s an important season for the management team – they won’t get away with a three-month slump or that Plymouth game next campaign. They most likely wouldn’t have been kept on had they been at an Aldershot, or Burton, or Accrington Stanley, and a poor start will start putting the doubts in many a mind again.

It’s obviously an important season for the new signings, but the more established players like Jack Midson, Sammy Moore, Seb Brown and Byron Harrison are going to be under scrutiny too. Will Midson run the risk of being a one-season wonder, a la Clive Allen? Can Moore (S) continue to progress? Will we see a more mature goalkeeper who did seem to go a little bit backwards last time out? And whither Byron…

But reading the tone of some of the releases the club has put out over the summer, where it practically admits it has to be in the Football League, it’s an important time off the field too. There is no guarantee that AFCW will be a Football League club by May – it’s a strong division again, and the very size of our support etc no longer provides the dead cert of staying in the division it was – even the Conference was a division you expected us by right to remain in.

It’s a club that is keeping a mid-term eye on being in League One, although it pretty much admits that L2 will be our division for a while. And it’s a club that faces pressure both in finance (especially with the KRE and ex-JS) and the very real need to make proper progress with the new ground. That in itself has crawled along for two years, and we can’t move along tortoise-like for another 24 months.

I think this season we’ll see a club that may be less willing to give the benefit of a doubt in future, on the basis it has a lot to lose if it doesn’t. We all seek improvement, and for this season and next doing better may simply be not having horrific long runs without a win, and comfortably finishing between 12th and 15th. Never likely to go up, but more importantly never likely to go down too.

We’re kind of expecting a season where nothing substancial happens, and we may be hoping for it too. But those kind of expectations are always the most dangerous…

So, was it worth it? At least we’re back ruining our weekends again.

In a nutshell: Please don’t draw Reading in the next round of the Capital One Cup if we get through.