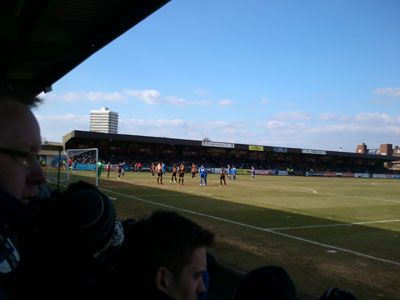 So, a must-win game. The proverbial six pointer. And coming off a loss on Good Friday, and looking to bounce back against a team with a lousy away record.

Therefore, Over The Hill 0 Underhill 1 was always going to be on the cards.

As far back as February, I convinced myself we were going down this season. We scraped draws, and then we had a very good March. But right now, on Easter Monday, I’m back to believing we’re going to be playing Woking in a league fixture next season.

Why has it gone so shit so quickly again? This has been a fucking horrible Easter for us, with no goals, no points, and with the teams below us (for the most part) picking up points.

We could (and arguably should) have been safe this season, but not for the first time this season, we’re blowing the chances we get handed to us.

Today was a dire game, and then some, but at the very least you expect a hard grafted point. We couldn’t even fucking get that.

Needless to say, it was one silly, brain dead mistake from a silly, brain dead player that has plunged us right back in it. To be honest, I’ll be happy if Hussey isn’t with us next campaign – his crossing was beyond awful, and if he thinks he’s using us to go back into League One – well, more likely back to the Conference South…

Hell, I’d be happy if Youga played the last four games. Even with his tackling.

We’ve made some good signings in January, but Hussey has turned out to be one of the worst – there’s been nothing to suggest we should keep him as a Conference club, let alone a League Two one. This is not the Hussey who we sold to Coventry.

But he wouldn’t be the only one. Whatever happens this summer, whether we stay up or not, it’s pretty clear that a lot of these players shouldn’t be here next season. Antwi is another example of this. If we do stay up, it will be because we’ve scraped enough points together, and nothing more.

Also, I really don’t know NA’s love obsession with Darko, as he offers precious little apart from a racist sounding surname. True, we lost Dickenson because of injury but we’ve started to look very impotent up front at the worst possible time.

Strutton offers a bit more, but we weren’t going to score today, were we?

I note NA’s comments afterwards that one mistake cost us, but what I hope he really said to them was to look at the League table, and today’s results, and realising just what they’re doing.

Whether it’s going to take another clear-the-air type bawling out session, a la Chesterfield, or whatever – I don’t know. But we now need something – anything – to push us over the line. We’ve now lost two in a row, quite possibly it could be four-in-a-row, which will relegate us.

Does this lot have any backbone? Is this lot simply losing it at the worst possible time? Do a lot of them think they’ll be released in the summer anyway, and therefore asking themselves if it really matters?

And does NA have it in him for one final push, one final spark, one final, well, whatever?

All of a sudden, we’ve gone from mentally planning for life in L2 again to wondering if our manager will actually be in charge next season. It’s all very well him and the players coming over to clap us afterwards, but that really means fuck all when you’ve lost another game and starting to sink at the worst possible time.

No doubt we’ll hear the rallying cries, the “we’re going to do it for the supporters” type bollocks. We’ve already got NA saying we’re going to go back to basics. Personally, I’d rather us go out and get the results, and then you can start talking.

Because with shit like today, and at Rotherham on Friday, your words currently mean nothing.

Games like this relegate clubs. And to be honest, it would be a relegation richly, richly deserved…

Plus points: None whatsoever.

Minus points: Probably just about everything

The referee’s a…: He gave us some, he gave them some, to be honest I didn’t really notice him. So you’ll have to put the blame elsewhere…

Them: I have to take issue with the (admittedly skim-read) OS report on this game – Barnet did deserve it for one very good reason – they had their chance and took it.

No, they were no better than we were, which seems to make this hurt even more, but you can see why they’ve stayed up for so many seasons : theyÂ  know how to get the right results at the right time because they know how to grind it out.

Or in other words, they don’t have brain dead cunts like some mentioned on here playing for them.

Methinks that NA should be getting hold of the phone numbers of other managers who have been in charge at Underhill, and ask them what they did to ensure they were playing the Great Escape music at the end of the season. Because I reckon he’s going to need to…

Point to ponder: If one is minded to at least attempt positivity at this moment, do we need one more fucking big kick up the arse to get us to safety?

One reason I hope there’s an on-field overhaul this summer is that we seem incapable of getting results until we absolutely have to. We lost to Accrington (badly) when there was little pressure on us.

Today was a must-win game, although it hasn’t relegated us. And now we’re finding that we have to get results from the last four games. Unless we are really that poor, it should refocus us again, which on reflection we’ve lost over Easter.

This calendar year, when we’ve been properly needing to get a result, more often than not we’ve got something. And I do think that our players are so genuinely stupid that they don’t have the brain power to realise that winning games sansÂ pression makes things easier.

If we do knuckle down and start grinding out points again, then all well and good, but the simple fact is, we shouldn’t be in this position in the first place. It’s almost like you have to jab this lot up the arse with a red hot poker just to force them to put one foot in front of the other.

And that is a sign of a mental feebleness that we’ve never properly got rid of.

Whether we can muster enough collective brain power and whatever else is needed to push us over the line will be seen finally in the next four games. We may not deserve relegation, but some of these players certainly do…

Truth is stranger than fiction: (1) The cold wind. And it’s April. (2) I’m sure somebody has done stats on this, but don’t we always have a lousy Easter? In both the WFC and AFCW era we’ve often stunk the joint out over it, although previously it’s never quite mattered… (3) “Blue Monday” by New Order playing on the PA beforehand. The subliminal message isn’t particularly funny right now.

Anything else? The whole “We Are Wimbledon” thing, with the big banners and the “get behind the team” thing never worked, did it? In fact, I was surprised at how dead the atmosphere was.

Whether that was nerves, the cold, the game, or whatever, it pretty much flopped today, and instead of being a rallying call it just managed to look quite contrived.

And perhaps it just proves that our fans simply don’t respond to things like this?

We’re not “that” type of supporter base. You don’t get much in the way of post-goal music with us, thankfully, and your editor always cringes at other grounds when some wannabe Michael Buffer earsplittingly tells the supporters to “MAAKKKKKEEEEEESOMMMENNNNNNNNNOOOOOOOOOIIIIIIIIIISSSSSSSSSSEEEEEEEEEE”. And I think we are better off for it.

Granted, I don’t think I would be writing this had we got the win, or even a draw, but for the last two home games I hope we just leave people to their own devices and let them get behind the team in their way. We work best when it’s more organic/spontaneous.

I know today’s WAW was well intentioned, but remember that it was originally a response to the Franchise game. On 2/12/12, it did what it needed to do. On 1/4/13, it didn’t, and while I won’t blame it for today’s shit, it didn’t help things…

So, was it worth it? Fuck off