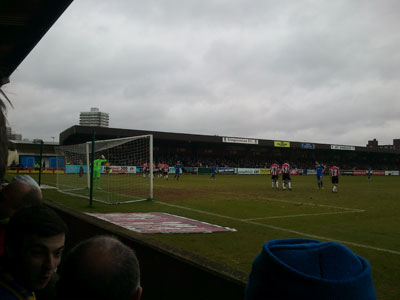 When the club announced a new line in the club shop was coming out today, I get the feeling it should have been offering AFCW branded underpants with toilet roll to boot…

As it stands, it’s so tight that an errant fart will end up being a turd tsunami at this rate. I haven’t looked at the league table, I don’t want to look at the league table and I don’t think I could stand looking at it right now without needing further medical assistance.

Instead, I’ll just concentrate on the game. And it was certainly exciting, although only if you’re a neutral. I suppose really it was the correct result, as we had a couple saved and they definitely had a couple more they should have got. If every shot had gone in, it would have finished 7-7.

This site hasn’t been the friendliest to our squad over the course of the last two seasons, so credit where credit is due today – they fought like fuck and got a point which could have so easily been three.

While I would expect them to do exactly that anyway, at least they finally did that.

And yes, we scored two goals. That is not a mis-type. One of our players actually worked out that if you kick that white synthetic bladder thing that bounces a lot into the wooden painted rectangle structure with a fishing net, good things can happen.

The defence did seem rather shit, though, although Sully jnr did literally save us a couple more times. Not forgetting Pim’s off-the-line clearance that could have been a good test for Hawkeye. But then, how many headers/shots did we have?

I suppose really today was a turning point, because four losses in a row would have the demoralisation too far. It would have been a genuine case of whatever we do not being enough.

The players can at least think to themselves that if they put in that much effort again next Saturday and against Fleetwood, the luck may finally change. And that’s all you can ask for now.

We’re not a good side, but we’ve known that all season. If you can’t be a good side, then work your fucking bollocks off. That’s the old WFC creed, and if we do find ourselves relegated, at least give us the little crumb of comfort that we did everything we could.

We could have done without it being Gillingham next week, but is that a bad thing? They’re up, and that’s a bit of slackening there already. Plus, your editor has covered games at Priestfield against York and Stanley, and trust me – we can get something from that game.

That we drew, we’re still in the dogfight but we’ve managed to pick up a bit of confidence is not something to be underestimated right now. We really are in the by-any-means-necessary stage of the campaign. Be honest here, if there’s a drop ball in the 98th minute next week, and Midson has to kick it back to their keeper….. although I’m sure there’s already a DT motion (subject to ratification by the Ethics and Morals sub-committee) telling us to let them score twice 😉

We don’t want to go right to the Fleetwood game to see where we’re playing next season, but we’ve got to face up to that now. But at least we’re not the only ones…

Minus points: We didn’t win. Too many errors for their goals. Hussey. Darko. Still missing something, including GA.

The referee’s a…: Honestly didn’t notice him, which is never a bad thing.

Them: I can see why they’ve had a shit run of form recently, which is something I wished we’d capitalised on a bit more. OK, they’re better than us, they seem better up front than us, and I like Tisdale as a manager (and he’s a good interviewee too),Â  but I still wasn’t massively impressed by them.

Their keeper was, well, “nervy”. Maybe he was having a bad day. Mind you, if I wore a goalie shirt like that too, I think I’d be a bit distracted.

Decent turnout by their supporter base, over 800 of them, and for once we can say to a club that we give them a better away end than they give us…

Point to ponder: Whither Jessie Darko? He really does seem like a waste of time, and I really can’t see him hanging around long in the professional game. What does he offer? With KSL and Strutton, at least you can say they run around a helluva lot, and cause the oppo defenders grief.

JM we all know about, GA too, so why we have him still I don’t know (and to be fair to NA here, I think he got unlucky with his judgement over Dickenson). I can only assume that NA sees something in him that is apparent on the training ground that us plebs simply don’t see.

Either that or he has those photos of our manager.

I guess he didn’t do himself many favours when he meandered off at Cheltenham, a la Carl “Cort” Cunt all those years ago. You can cope with lazy players if they still get you goals or make a difference. Darko manages to turn a 4-4-2 into a 4-4-1.

And yes, I know he’s going to get the 98th minute winner against Fleetwood….

Truth is stranger than fiction: (1) Insert sexist comment about the Wombelles here. Who did they put forward for the MOTM? (2) Record crowd ever at KM (at least for AFCW). That with segregation too, unlike St Albans.

Anything else? Was it me or were there less nerves before the game than there was before Barnet? Maybe it was because it was put-up-or-shut-up today, or maybe it really does prove the point SW19 made after Easter Monday – namely that our fans react best when they’re allowed to do their own thing without contrived stunts like WAW was.

Actually, it was quite a decent bit of noise, and the players certainly can’t complain about it today. But speaking of WAW – the song really is a dirge, isn’t it? I know it’s a bit of a statement of defiance, especially given what we’ve gone through as a fanbase, but it isn’t an uplifting song.

While AFCW plays the nostalgia card too much, especially over transfers, I really think we should come out to this from now on. And yes, it’s Selhurst era, but don’t tell me it wouldn’t work:

As an aside (and a bit of a bugbear as you can guess), I think the club has got to be pretty careful how it approaches the next two weeks. It does have a habit of ramping things up that fall flat (WAW before Barnet, and for those with longer memories the buildup to Wycombe in the FAC).

Conversely, when it doesn’t try that, and it lets the occasion take over (Eastlands, Staines playoff final, even the Franchise game to an extent), it usually passes off all right. There’s a lesson to be learnt there.

This is going to be a very hard fortnight to get through, because the stakes are so high. People will be anxious, tetchy and all round shit scared. We don’t need silly stunts, we don’t need phony “unity” calls, we are far better when we are allowed to knuckle down without distractions.

And perhaps maybe a lesson for the club in future…?

So, was it worth it? At least it’s exciting for the neutral.

In a nutshell: My arse hurts already.