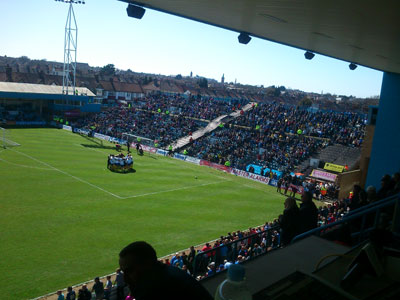 And we continue to survive…

I’m not sure if we realise just how big a point League One Next Season 2 Status Currently Unknown 2 will turn out to be. While there was always that hope that we would somehow – somehow – get a win at Priestfield yesterday, and somehow – somehow – Wycombe did us a favour, it wasn’t going to happen.

That we almost came close to fulfilling our side of the bargain yesterday is one thing. That we did it after one of the worst 45 minutes I can remember this season (and boy, there’s been some competition on that score this campaign) is something else entirely.

What, I don’t know, but if we are going to find ourselves back in the Conference next season, at least we’ve given the impression that we’ll go down fighting. And that’s really all you can ask for.

We don’t want that, of course – us fans don’t, the various boardrooms don’t (even if their actions have contributed to it getting to this stage), and if the body language of NA and Meades yesterday in interviews is anything to go by, those who really affect things don’t either.

Plenty will be said and written about what needs to be done against Fleetwood. We all know the drill, and it’s no small crumb of comfort that despite all the shit we’ve had to endure this season it’s still in our own hands.

And the game is immensely winnable.

For now, let’s think of yesterday. It will be largely forgotten thanks to events next Saturday already overtaking things, but this might have ended up being one of the biggest results of the season.

No, we didn’t win, as good as that might have been, but at least we put some effort into things. Because after that first half display……. to be honest, I really couldn’t understand the clamour for Prior. It was a gamble that didn’t pay off – he looked like, well, a non-league striker.

When we went 1-0 down, my heart sank. When we went 2-0 down, I really genuinely thought it was over. Not only for the game, but for the season too – this campaign has been pretty demoralising at the best of times, and it would have been a psychological hammerblow too far.

But bollocks are what matter right now, and we showed plenty of that in the second half. Even if there were times when we went 1-2 where Hussey’s impression of an NFL kicker were gaining traction.

Sometimes, you think it’s never going to happen, and then all of a sudden it does. And that’s how I felt after the second goal. OK, with a slight loss of professionalism in the press box as well 😉

Yes, we could have won it, although be honest – you shat yourself whenever Myles Weston ran at us. Not that I think we would have deserved that, in truth. Thinking about it, that could have been an even bigger hammerblow than losing 3-0 – we did all that hard work and like so much this season, it was never going to be enough…

But as we sit here this sunny Sunday morning, with six days of this wretched clusterfuck of a season to go, at least we now have an end game in sight. We know what to do, and we’re owed that one final bit of luck/skill/effort.

And yesterday certainly has given such hope. We did after all go to the best team in the division – on their own patch – and nearly take them down. And trust me, they wanted to win yesterday.

That said, I’m still puzzled as to why the first half was so dire and clueless. Maybe we were overawed? Or maybe we were a bit too hyped up and froze as a result? One thing is certain, if we’re going to do that, let’s make sure we’ve got it out of our system already….

Plus points: We drew. The second half. Coming back. Scoring two from open play. Jack Midson finding the net again. A sense that we can do it next week.

Minus points: The first half. Going 2-0 down. Jason Prior. Hussey’s kicking. Other results elsewhere.

The referee’s a…: Andy D’Urso. There is no need to expand this section any further.

Them: Title winners, and deservedly so, if we’re being honest. They really wanted this, as the first half showed, and they were genuinely shitting bricks when we took it back to 2-2.

You do wonder how they’re going to do in League One though, because as the likes of Chesterfield, Bury and Wycombe have shown, winning promotion up there isn’t a guarantee you’ll stay in the third tier. One has to believe that DK won’t be there, and given this club’s almost obsessive penchant for bringing back old players…

Point to ponder: Just how important will Meades’ goal prove to be? As said so often since 5pm yesterday, with all other results going against us, this will be one of the very rare times this campaign that no other outcome anywhere else will matter. No need to check other scores, no wondering if Northampton will do us a favour, that kind of thing.

Perhaps a better question to ask right now is, have we already got our first bit of luck without even kicking a ball? I didn’t realise it until Chris Slavin pointed it out to NA in the post-match interview yesterday, but it didn’t make me feel better when he said it.

Up the District Line when we take on the Cod Army, Dagenham face York, and the reason we’ll stay up if we win is that no matter what happens there, we will be above one of them.

Was the other most important result yesterday at the Recreation Ground? On the surface of it, Aldershot winning wasn’t good, but when you realise it was against Daggers and they could feasibly go down….

That has taken some of the pressure off next Saturday. We could have done without needing [insert team here] to slip up too, and thankfully we don’t have that factor to deal with. It really is down to us.

But then, it always was…

Truth is stranger than fiction: (1) 1100+ of us, and we looked decent from the press area (see picture above). You could even hear us at times. Think it’s fair to say that although the team and club may be on a downward trend, the support isn’t. Though if we go down… (2) Telling? Jesse Darko’s name was on the original written team sheet then scrubbed out… (3) What were those t-shirts we were wearing about? Something about “score” on them, I think. Though it might be a directive for next week.

Anything else? You do realise that this time next week, this season will be over…?

It’s funny, really, that after what has been probably the most horrible campaign I can remember in 30 years that wasn’t related to the theft of Wimbledon FC, it’s come down to, well, this.

As end games go, it will be intense, nervy and somehow fitting for a campaign that has been wrong since the 7-0 pre-season mauling by Reading. We’ve had three managers (one interim), so many personnel changes, a long time literally being 92nd, little runs of form, longer runs of losses, defensive lapses, thrown away points, and some moments of outright horse shit.

And yet it will all come down to getting just one goal without reply in 90 minutes.

In a very strange sort of way, I’m quite glad it’s going to come down to classic last-game-of-season-survival fayre. It’s a finality, there’s no shades of grey – it’s either win or we go down. For various reasons, we always seem better when we have to focus on something, and next Saturday will be exactly that.

Nobody reading this will miss the 2012/13 campaign. I’m certainly glad that I won’t need to either write or sub-edit a report from any more games for about three months. Or until next pre-season starts.

Because this has been very mentally draining, especially when you consider how many times we’ve self-inflicted our wounds. There almost seems like onefinal chance of redemption against Fleetwood, one final chance to right all the wrongs of this season. You take it now or you’ll forever be underachievers.

And yes, this is going to be as bad as the Staines playoff week was. You’ll need some toilet paper and plenty of cold cream from the excess wiping.

However, my main thought right now is how a long slog of a season has suddenly got one game to go. Maybe it’sÂ  because we’ve had to constantly grind and not have any sort of slacking off period that drags out campaigns.

There have been times when I really thought this season would never end (and not in a good way either). When you’ve been so constantly shite throughout the season, when every game seems like a permanent slog, and when even the run of form we had in March somehow managed to be draining too – it’s fair to say this season has really got to people in a way it shouldn’t have.

Naturally enough, plenty is going to be said and written about this season about to expire, and whatever happens there has to be changes. If only in the mentality of the club. But for this next six days, that can wait. And it will wait.

And because of that, I already sense one final burst of mental energy from the supporters (and to be fair, the playing staff too). It’s not being demob happy as such, more a case of one final chance to get it right – a chance that we never believed we’d ever get.

Yesterday has almost been forgotten already, despite the result and opponents. And to be honest, this week we should just forget what has happened before and focus 100% plus on between 3pm and 5pm this Saturday.

Because this time next week, we won’t need to worry about that.

So, was it worth it? As it means we can still stay up, then yes.

In a nutshell: One more win…