You’ve got to know when to Oldham 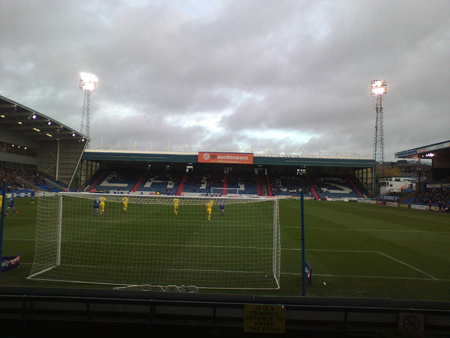 Yep, a rare away trip for SW19. Shame about the mandatory shit pun.

If truth be told, I have mixed feelings about Mills 0 Boon 0. Yes, getting a goalless draw on the road is never a bad result. And yes, we played well in the first half.

But I can’t help feeling we got away with it a tad yesterday.

We made the avant-garde decision not to play with a recognised left back**, which Oldham eventually sussed out. We had to rely on Shea to make some pretty decent saves.

** – because Meades and Kelly were crocked, not NA playing silly buggers.

There were plenty of hearts fluttering – and undergarments soiled – when they had a goal disallowed right at the end, and if it had stood you probably wouldn’t have been surprised.

Yes, we had a lot of the ball (hence the earlier comment about the first 45 minutes), but we didn’t really do much with it. With the exception of Reeves in the first half, I’m struggling to think of many more chances.

As you’ll read later on, that might not be a good sign. Don’t worry though, it’s not that apocalyptic. Not much, anyway.

Still, it’s a point, and it’s better than a kick on the bollocks with a steel toe cap. We would have lost this earlier in the season, and our new-found spine is still there.

Which really is all you can ask for. We do look like we belong in L1 now, and the stupid little errors that cost us points at Coventry and Rochdale seem to be at a minimum these days.

Mind you, it was telling a couple of people left when Barnett came on…

Plus points: We didn’t lose. Clean sheet. James Shea. Coping with a bit of squad rotation.

Minus points: We didn’t win. Perhaps should have lost. Like a used condom up front.

The referee’s a…: Darren Deadman. No further commentary is necessary.

Them: One place below Franchise in the relegation places (stop laughing), although they showed a bit more promise than their league position suggested.

We should know by now that playing teams lower down the table has always been our Achilles heel, so I suppose getting a point should be seen as a win.

Still, it was an enjoyable day out yesterday. The stewards were friendly enough, and you could have got in for £15 with some advanced planning.

For many of our fans, this was the first time at Boundary Park, where two sides of it are unrecognisable from our last visit in the mid 1990s.

Those who have been before will probably have remembered the 6-2 gubbing, which was one of the stranger games of that era. And if you haven’t, and it’s been dormant in your brain since then, I apologise for bringing it back up again.

And no, I’m not going to pay for your resultant therapy.

Shit crowd though, especially given it was an international weekend. Mind you, Oldham itself seemed shut – there were very few takeaways around, and those there were closed.

I never quite understand that – from memory, Blackburn in the 1990s was like that too, and maybe it’s a Lancashire mill town thing?

Oh, and their “ultras” had a drum. And red/blue flags too. Palace want them back…

Point to ponder: Given that we had a decent October, are we about to suffer a loss of form?

I wondered that when our forward line forgot to be, er, forward yesterday. Additionally, we seemed a bit too content at drawing at a side that is, let’s be honest, in the bottom four.

Strings of bad results happen to just about every team each season, only those who tear up their division each season tend to escape that.

Are ours around the corner? We’re relying on Elliott and Taylor to recreate the magic, and dare I suggest we’re expecting too much from Poleon? They looked as ineffective as I’ve seen them for a while yesterday.

Barnett’s already a write-off in the eyes of some, the chant for him did seem an attempt at irony. He needs a goal, although in truth he needs a few more than that.

At the back, I forgot that Charles is still out. Although I will certainly remember us not having a LB.

I know we’re squad rotating because of this slog ahead of us, and if we come through that without too much damage I’ll be more than happy.

Also, I’m in no doubt we now “belong” in L1, and I certainly don’t think we’ll freefall if we do start losing games. We have a spine nowadays.

Truth is stranger than fiction: 1) I hate average speed cameras. Especially the bastard stretch on the M6 around Birmingham that goes to 40mph. 2) “Mouldy Old Dough” by Lieutenant Pigeon as the teams came out. Insert comment about pies/the local hit parade here. 3) Speaking of their PA, he was quite keen on the 1980s stuff. And a bit too excited when reading out the Oldham team…

Anything else? I’ve undoubtedly mentioned this in previous reports, and this may come across as a little bit self-indulgent, but going to Boundary Park re-inforced this once more.

Those who go regularly to games will probably take this for granted now, but yesterday felt like I was watching Wimbledon FC back in the 1990s.

It’s almost as though everything from 2002 to 2011 simply didn’t happen, and that despite the “AFC” prefix and our third tier status, the game yesterday was as “normal” as it was back two decades ago.

And when you look at it in those terms, it’s still impossible to get your head around it.

The obligatory who-did-we-play-a-decade-ago reality check will get mentioned here. To save you looking, it was at Harrow Borough in Turdeyland.

We won 1-0, Roscoe Dsane scored, and we did it in front of 790 people. Which is just 300 more than what we took to deepest Lancashire yesterday.

Now that my memory has been jogged, it was also the year of the original Darlogate, and everything that entailed. And christ, did that feel like the lowest point in an era that we though we’d never get out from.

Escape we did though, and thankfully those times are now just a history lesson.

But when you look at who WFC were playing twenty years ago this week, suddenly it feels a bit more what we’re used to. Or more accurately, a lot more…

In 1996, the nearest game around this time was Luton in the League Cup (won 2-1, don’t ask me who scored). Yes, we played Arsenal the previous game at Shitehurst (drew 2-2), but the next game was against….. Coventry.

Most of you who go to away games probably passed this stage ages ago, but even yesterday sitting/standing there, I did still have the brief “fuck me” moments.

In time, that will pass, but for now AFCW has achieved almost all what it set out to do in 2002. The final bit is yet to come, needless to say, and those at the game might have looked to their left hand side more than a couple of times at this: 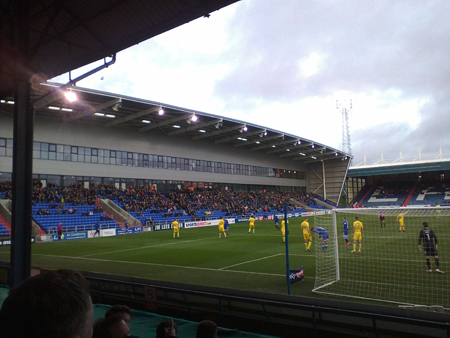 Be honest, you’ve looked at that a couple of times and though “hmm, main stand…”.

OK, the design will be slightly different, not too dis-similar to Bournemouth’s main stand, but you’re already picturing it with blue seats and initial enquiries about hospitality boxes.

If we’re on the theme of going back to the mid-90s, something else from the depths of your editor’s memory. Around 1996, people were mentioning the dog track as a potential new venue back then as well.

And the doggers were upset back then too. Just try and find some quotes from a bloke called Jarvis Astaire…

So, was it worth it? Perhaps.

In a nutshell: Roll on Tuesday.