Sunday Afternoon At The Movies 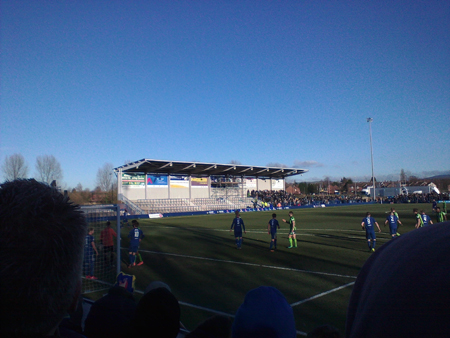 OK, we’re in tonight’s third round draw. I know we came back to win, and it was great viewing for the millions (?) watching on BT Sport.

But I feel just a tad guilty about Curzon 3 Odeon 4.

The headlines this morning are all about how we managed to score four goals in about fifteen minutes, and yes – it’s a pretty remarkable feat regardless of who you play.

This ignores what should have been the real story, however – for the first 78 minutes we were pathetic.

Actually, we were more than pathetic. We were beyond shite, disinterested, talentless and as clueless as a Franchise fan with a naked woman.

And to make it worse of all, this was against a team struggling in the Conference North – not even the national one.

Today would have been murder getting into work/school. There would have always been one “comedian” who would place a certain cinema chain’s ticket on your desk.

West Ham fans would be pointing at us in the street and laughing.

Thankfully, we came out of yesterday afternoon with a minor bit of FA Cup folklore. And at least it’s testament to our backbone and spirit that we’re able to pull out these kind of comebacks.

More on that later. I notice NC said that there was no half-time bawling of the players, although given how wank we were even in the second half, maybe we should have done.

NA looked a bit sheepish when we scored the winner, and I guess on the journey back/this morning, he’ll be giving them the mother of all rockets up their arse.

They need it. Especially with the circus this week upcoming.

A couple of people left at 3-0, and while we can laugh at their lack of faith now – I wouldn’t have blamed them. It was fucking freezing, people had a 6am start and the less said about the game the better.

If it went 4-0 (which wasn’t entirely out of the question), anyone who had a 5pm train would have decided to spend an hour longer in a Manchester boozer.

Yet strangely, there was always that sense that if we could just somehow get one, we could at least make it respectable. True, a 3-2 loss will still be a bad result, but it looks better than 3-0.

We got one, although we seemed to treat it as a consolation, given the way we seemed to trundle back to the half way line. Then the second came and all of a sudden it felt like we weren’t going to lose it.

OK, it was a bit direct, and to his credit Barnett made the difference. I will not entertain comments that he’s found his level. But nothing else worked, and suddenly they were crumbling.

When it went 3-3, my first thought wasn’t a replay, but whether we’d fuck it up right at the death. Mind you, when Elliott rose up and headed home in the 94th minute, it took about two seconds to process that we’d actually won…

I forget what I lost in the ensuing melee, although Danny Bulman got himself a new partner for life…

Judging by everyone’s slightly dazed reaction afterwards, I think we were in that weird moment where you’ve witnessed something immense but you’re guilty how it turned out.

Let’s face it – we deserved a replay at the very most. True, we would probably have won that 4-0 or so, as we wouldn’t have put a second stinker in against the same opponents.

But we’ll probably end up with a decent draw now. We don’t deserve one, but the way this has gone, we’ll fall into a barrel of thumbs and end up sucking a tit…

Plus points: We won. Last 15 minutes.

Minus points: Everything else before 78 minutes.

The referee’s a…: Didn’t do too much wrong, let some of it go a lot more than other officials. Probably was as amazed at what was going on as everyone else.

I do feel a bit sorry for officials when they have to book players for celebrating, especially late goals. It’s a bad rule with good intentions, and if we’d lost a player because of it…

Them: I must be in a weird mood because of this game, because not only am I showing sympathy for an official I’m doing the same for a beaten opponent.

Put it this way – there was only one team our fans wanted to clap off, and it wasn’t AFCW. I bet they must have been in dreamland (the metaphoric description of elation, not the crappy amusements in Margate) when they were 3-0, so you can imagine their deflation when Elliott netted.

Their goalie needed to be consoled, and they really did look in shock at full time.

To be fair, they took the game to us, realised we weren’t on it from the off, and we knew what sort of match it would be after about 30 seconds.

That said, they were clearly tiring, and while plenty has been written already about the last 15 minutes – we did show why we’re in L1 and they’re in the Conference North.

Friendly enough, looked a decent setup, though they have their cliched “Ultras” section, complete with flags and unoriginal chants. Glad we shut them up, and they can go back to supporting Man City.

Sadly, seems like the area has its scrote problems, our coach and a lorry got bricked afterwards (no CCTV, apparently), and there were apparently a couple of gentlemen during the game looking at the various cars.

And they weren’t traffic wardens either…

Point to ponder: So why do we have to keep going goals down to pull back? Enough has been said about yesterday, and we had to come from two goals down at Bury in the first round too.

I’m sure you can think of other situations, but it does seem to happen more often than it should.

Curzon is surprisingly easy to explain away – our attitude stunk. Had we applied even half of the last ten minutes for the opening period, we would have won comfortably.

But how do you explain Bury and others? It can’t be a complacency issue for those games, surely? I can accept it happens once in a while, but it does seem too much of a feature for my liking.

This squad, quite rightly, gets plaudits for the way it can come back. However, it should get more criticism for keeping digging the hole that it gets itself out of.

A quick glance at the goals yesterday suggests how poor we were in defence, as if the cold and the early kickoff was simply too much for them.

Maybe we have a soft touch at the back again? Fuller was dreadful yesterday, and it felt like the beginning of the season. But then, none of our back line came out with any credit.

Do we need to do a bit of rebuilding in January after all? We have a month to decide that, and while I think we’ll be OK for this season, one wonders if we should already be planning for 2017/18…

Truth is stranger than fiction: 1) Utterly cold. And I mean, bone-chillingly freezing. What was happening on the field didn’t help matters. 2) Speaking of fields, a rather typically Lancastrian bit of scenery behind our goal – lots of shrub, a stable with a suitably non-plussed horse and a lone house in the background. Hard to think that just half a mile away, there was an industrial estate with a McDonalds.

Anything else? At least we can now dream of who we will get in the draw tonight.

For obvious reasons, we don’t want them. This week is going to be tedious enough as it is without a second helping soon afterwards.

Naturally, we all want the glamour tie. Anyone from the Premier League home or away will make yesterday all worthwhile.

A Championship side can be a mixed one – we’d happily pick Villa, or Newcastle, or Leeds, or even somebody like Sheffield Wednesday.

There’s plenty of potential local interest too – QPR, Fulham, Reading, Brentford and Brighton would all be good ones, especially away.

Of course, there’s the possibility of a Burton at home.

You tend not to think of teams at our level and below, though Slutton could be an interesting one. And the last 24 hours has proven that if anything, games against bottom feeders are the worst of the lot.

Whoever we get, at least we’re actually in the draw, so that’s something to be thankful for. I remember us drawing the Scousers a couple of years ago, so with luck we’ll have similar feelings come 19h30 this evening.

So, was it worth it? Eventually, I suppose.

In a nutshell: Next time, don’t leave it so late…