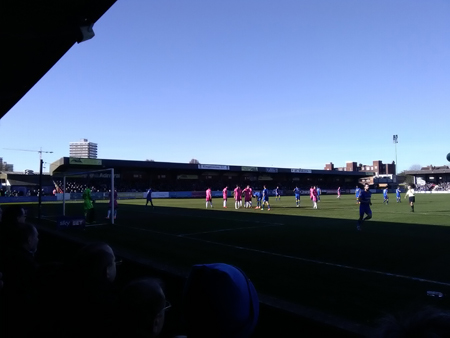 That’s ninety minutes of my life I will never get back.

Chances are, if you do something like stub your toe, or burn yourself with your toaster, or fall down the stairs, or have your scrotum ripped off in a freak yachting accident, it will be slightly less painful than watching Terry Brown 0 Phil Brown 2 again.

I genuinely cannot remember us playing worse for some while – certainly not this campaign, anyway. Maybe some of the games around Christmas, or even back to last season? It’s been a rare occasion, and for that we should be thankful.

No, we wouldn’t have scored if we were still playing up until tomorrow evening. But I don’t think we would have managed to put a couple of passes together either…

I’m not sure what went wrong, though. Before the game, NA asked for some more tempo, so I assume “tempo” is an slang Italian word for “panini with shit in it”.

So, are we mentally “gone” for the season? If we are, we shouldn’t be. Granted, we got lucky with the results today, and thankfully we’ve got seven games left this season – we won’t play as badly again.

Famous last words, and all that.

But if Northampton was the distraction for the Franchise game, perhaps this game was the inevitable comedown? Fleetwood should have been that fixture, but obviously wasn’t, although I think there is now a real danger many will be living off that particularly glorious Tuesday.

For those who weren’t there, you can relive your afternoon with pleasure. To describe the game, we were sort of all right until they scored, then we had a complete inability to even string two passes together. There were hardly efforts on goal, but plenty of errors, and those who left early did the right thing.

Even the traffic going away from KM was shit. And it was cold in the shade as well.

If you want more, then I apologise – attempting to relive this game more than I have to is banned under the Mental Health Act…

Plus points: At least the sun shone.

Minus points: 3pm to 5pm, inclusive.

The referee’s a…: OK, he was a retard, though as usual blaming him is a bit of a cop-out for our own wankness. That said, is it true that we’ve barely won a game when he’s been in charge? Even down to non-league days?

If so, I bet he has the Franchise badge tattooed on his dick. Maybe they might have found some room for the “M”.

Them: Many described them as “functional”, though they were better than some of the other teams currently in the playoff (and even automatic) positions we’ve recently faced. They’re in the top six for a reason.

Just that bit ahead of us, though perhaps they have something to go for which gave them that bit extra? I wouldn’t be entirely surprised to see them in the Championship next season, if only because that sort of team usually does well when it really matters.

Nile Ranger’s goal was an annoying bit of good skill, though not as irritating as his goal celebration. Seriously, what’s all the taking his boot and pointing to it bollocks? On drugs, perhaps? Wouldn’t be the first time.

Or maybe he’s just taking his wannabe gangster bollocks a bit too far? You wouldn’t want to have him behind you at a cashpoint, especially if you forget to cover your pin…

Point to ponder: Whither Tyrone Barnett? Look, I know he wasn’t nearly the worst of a lousy bunch today, but when a player a) gets absolutely zero reaction when he comes on, and b) gets cheered sarcastically when he makes his first header, that isn’t good.

It’s widely expected that he (along with Whelpdale) will be on the “out” list come the summer, but there are growing Chinese whispers that he might be staying with us after all.

Obviously, we’ll have to wait and see, but I think many will be pissed off if he remains and Elliott is gone in the summer. And at least our current #9 worked his way into being a potential POTY this season.

And I don’t doubt there’s potential in there, but it just doesn’t seem right with him. You get the sense with, say, Taylor or Elliott that they can change a game (for the better) at some point.

With Barnett, unfortunately you don’t. A point that was made apparently by quite a few around me in the Chemflow…

Truth is stranger than fiction: 1) No announcement for MoM. Probably should go to anyone who stayed until the final whistle. 2) That wind – kicking it high in the air and returning about ten feet from where it was originally launched. And no, that’s not an excuse. 3) Weird pyrotechnic smell in the Chemflow afterwards. Either that or somebody has really bad farting issues.

Anything else? I have honestly got very little willpower to write more about this. I just wonder if today was how we expected most games in L1 to be like? Namely, the opposition knowing what to do with us, our painful lack of quality showing, and with a bad result to show at the end of it.

To be fair to us, we’ve done mostly OK and it hasn’t been like that for the majority of games. While we’ve played shit and lost (or drew, in one or two games earlier this year), you always sensed that we could up our game if we really had to.

Which does beg a question- are we mentally now on holiday? Some have been saying that today was like a PSF, and I heard similar after Northampton as well. If we do slip up, it will be quite a disappointing end to a campaign that has otherwise pleasantly surprised us.

Rochdale on Tuesday might be more important than you think, because the ability to finish on a high when you’ve got nothing to play for is a good trait to have. If nothing else, we’re owed something for today’s pile of toss.

I haven’t heard it, but apparently NA is saying that anyone who trains like it’s the end of the season, they won’t be picked. Presume that extends to actual games as well? But you can’t argue with his sentiments, and technically, we’re not safe yet.

And anyway, today was so bad that I bet even Leyton Orient fans will be pointing at us in the street and laughing…

So, was it worth it? Without a doubt the most stupid question that will be asked this weekend.

In a nutshell: Roll on Tuesday. Please.