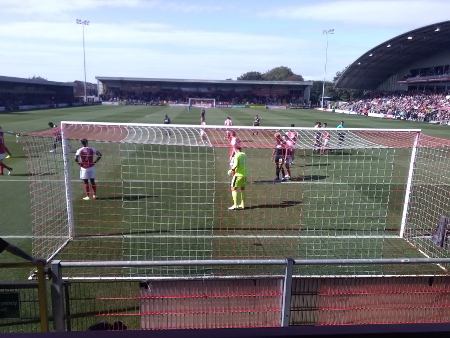 Twelve hours driving for this?

I suppose if there’s anything to grasp from Fisherman’s Friend 2 Football’s Enemy 0, it’s that at least it’s still only August – and we do have time in the next couple of weeks to do something.

And right now, we’ve got to do exactly that, and quick.

Your editor was reliably informed that yesterday was better than the Shrewsbury game, though it was quickly followed up with the predictable qualifier. It was just one kick in the gonads rather than two, after all.

But what happened to the positivity after Scunny? Or indeed, Brentford? How has it become so shit in just two games? This was your editor’s first league game of the season, and one thing struck me about AFCW.

We’re so disjointed it’s untrue. The system, whatever it is, just doesn’t seem to work – the players can’t seem to settle into it, and I hate to bring out the PSFs again, but they’re looking more and more badly planned now the proper games are in full swing.

Writing that has given your editor a horrible thought. What if the players we signed were intended to fit into this new system which isn’t working? Which may mean if we try and change it, they may not fit into that either..?

Yeah, it’s only three games in, but the obvious problem still remains – and it’s not an elephant in the room any longer. Two goals in the last nine league games, isn’t it? I genuinely cannot be arsed to look it up properly, but it’s a stat that’s gone beyond annoying.

Something is fundamentally wrong with putting it into the net right now. Taylor, McDonald and Appiah are certainly not bad players, but this has gone on since last season, when it became a running joke.

Trouble is, it’s no longer funny.

We only have one striker still at the club from the Oldham game in April, and the impotency is still the same even after three months off. So whatever hasn’t changed is causing some of it. Plus, it hasn’t gone un-noticed that those who do leave don’t have trouble finding the net for their new clubs.

Maybe we could ask Nathan Elder to come in a couple of times a week to show our forwards how it’s done? He’ll be cheap, anyway.

A lot of that is down to confidence, of course, and yesterday we did have a few semi-half chances. If only Taylor hadn’t fallen over himself in the first half when swinging to put it in the net. Or if he put his second half shot a foot to the left. Or if only McDonald had aimed about eight inches below the crossbar.

And if only Francomb could fucking cross properly.

Actually, that’s something else that struck me yesterday. Our ball control at times is woeful, though it got even worse when we went 2-0 down. Yes, it’s L1 rather than the Champions League, and it was a bit gusty, but it was poor for even this level.

I’m no football coach, nor do I claim to be one (unlike some supporters 😉 ) but I refuse to accept a professional footballer cannot work on that. Maybe it’s mental, and the block up front has spread to the rest of the team?

Maybe one goal will set it all in motion? It might have done the trick yesterday, which I think might explain NA’s comments about taking the positives. To be fair to him, he didn’t say anything we didn’t know already, and I’m fully aware that – like all managers – what he says to the media is different to what he says in the dressing room.

He was seen having an, ahem, pointed discussion just after the half-time whistle with the rest of the management team by the dugout, though I’m told this is normal practice.

I can’t imagine he’ll be happy with the two goals conceded either, and if you can’t score at one end at least keep them out at the other, then you’re fucked. But he’s got a job on, and I think NA the pragmatist is called for again…

Plus points: Nice chips from the chippy outside the away end. Decent gravy, too.

The referee’s a…: Can’t remember anything he did to annoy me, really. Perhaps giving five minutes injury time at the end was a bit cruel, given the circumstances.

Them: Got their first ever win against us, and proved the difference between taking your chances and not.

Were they significantly better than us? Not really, and you suspect we could have ground out a 0-0 (see below for why). Trouble is, once they went ahead they knew what they had to do.

That all said, I don’t mind Fleetwood. Yeah, they’re bankrolled, and I wonder what happens to them if/when the money dries up, but they’re not nearly as dislikable as Crawley are.

Some of their matchday suits were pointing our fans in the direction of their club bar, though perhaps they should have allowed them to remain in there during the game.

Also, they had an “amnesty bin” outside the away end, to put your knives/flares/guns/terrorist material/animal porn/Blackpool scarves in, no questions asked. Although I wonder whether they do DNA swabs when they empty it.

Not sure about two of their supporters flags up the home end, mind you. “Ultras de Cod” does sound a bit try-hard, but the one that got me was “One Way In, One Way Out”. Yes, I’ve watched Gangland as well – I know Fleetwood is a docks area, and they can be rougharse places, but still…

Point to ponder: Are we already seeing the first signs of the Season Too Far for both Robbo and Barry Fuller? Neither did themselves any favours for the two goals, and I suspect with Darius in there yesterday we might be talking about a well-earned point on the road.

To be fair to Fuller in particular, I seem to remember he started off slowly last season as well, but got into it more. But he got injured towards the end of the last campaign, and he didn’t seem quite so powering.

Robbo too might find his place under threat, especially as you can’t drop Deji at the moment. And if they do find themselves getting less gametime, I think both will know that they’ve played a major part in recent seasons.

Needless to say, that won’t help us in the upcoming games, especially if other teams suss out that we have weaknesses at the back. At least we have Nightingale as an option for the next game at CB, but Fuller?

We’ve talked almost ad nauseum about the blanks up front, but yet again we conceded a first half goal. And for the second time in a week, we failed to recover from it. George Long is probably the best AFCW era keeper already, but he’s let down by too much sloppyness in front of him.

Perhaps we should swap our defenders and attackers around? Might improve things…

Song sung blue: This occasional section bought out of the SW19 closet for one very good reason – as the Fleetwood keeper kept kicking the ball out of play, a new chant was born.

“Do Do Do, awful distribution”.

Sung to the “Conga” song that we used for Luis Cumbers (remember him?), it somehow makes the “you’re fucking shit” chant sound a bit, well, fucking shit. I beg the terraced masses to learn this one, and sing it whenever the opposition balls up, because it may turn out to be a classic.

Just don’t do it whenever we do likewise…

Truth is stranger than fiction: 1) “London Calling” by the Clash over the PA before the game. Almost mandatory to play this song at grounds within the M25 (except us), but in Lancashire? 2) They played this after they scored. Insert jokes here.

Anything else? Yeah. This Harry Forrester rumour won’t go away, and I would guess the Daily Record and Scottish Sun would be well briefed with goings on at Sevco.

Whether it’s true or not, and I guess we’ll have to wait and see, it also sounds like NA is looking to bring in a fourth striker. Which is not only good news, but also going to raise questions about the budget.

Are we really down to the £8.50 quip he made during the summer? Though given the club I would not be surprised to find out that is the exact figure. It might mean that if one/both join up, there’ll be another one on the “out” list.

Parrett? He’s not one of NA’s favourites, and Hartigan started in front of him (and Trotter too, although he has been injured). The trouble with that is some reckon we played better when he was on the field.

Taylor? I expect we won’t let him go unless we got a stonking offer for him, and right now you wouldn’t even offer a fiver for any of our forward line.

Anyone else I haven’t thought of right now? Possibly, and I wouldn’t be surprised to see Jim White getting excited on transfer deadline day with the happenings at KM. After all, there was a sense even during the summer that we might be waiting for a player or to lower their wage demands when the crunch comes…

In a nutshell: A better squad. But a better team?