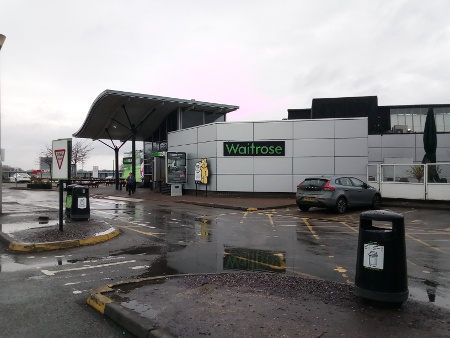 Actually, it does always sodding rain after all.

This arty (?) shot of Newport Pagnell northbound services was as far as I managed to get for the Doncaster game today. A surprise, maybe, but not a big a one as SW19 stalwart Secret Agent got seeing me… 😉

I think there were many people thinking that the game at the Keepmoat would have been in doubt, considering the weather. And as it’s only just stopped hammering it down up there, nobody can be really surprised.

That said, surely they could have announced it a bit earlier? I was lucky to have passed Frenzyville but not too much further – anyone who set off earlier would have enjoyed the sightseeing tour of Leicester.

So, er, I’m sort of scratching round for something to do. Something that doesn’t involve getting annoyed by the crowds at Tesco. I know, I’ll do a mock SW19 report on today – and yes, it would have been better than any game taking place…

Plus points: We didn’t lose.

Minus points: We didn’t win. No goals again.

The referee’s a…: Took his time, didn’t he? Although maybe he was taking canoeing lessons in getting there.

Them: For a new(ish) stadium, I would have expected their grass to have held up. Mind you, they also have rugby league and wimmins football on it as well, so maybe just a thimble of water sends it into quagmire status.

Point to ponder: I know that we had a postponement on Easter Monday against Pompey a couple of years ago, but haven’t we also have games called off in the non-league days too? Though I also remember a very soggy contest at Gander Green Lane against somebody in the CCL days.

Forget a midwinter break, perhaps we should stop playing fixtures at this time of year instead. We’ve never been that good even in WFC days anyway…

Truth is stranger than fiction: Traffic jams coming back. Plural.

Anything else? OK, I’m not exactly upset that we’re not shitting the bed again today. Fleetwood was a turning point for many, and that can fester now until Scunny on Saturday.

I’m not sure if we can do much more ATM than hope that Darius returns and puts just a bit of character into us. Because barring NA being seen in the KM car park in just his underpants, making chicken noises, everything now is just tinkering.

Today was a respite, and it demonstrates a lot of things when you’re upset with the time it got called off, rather than it actually being postponed.

No, it won’t mean that it will get Friday out of our system, but equally not playing today might have just allowed the sore spots to calm down a little bit.

It appears that this game may get rescheduled for May 1st, which is the last week of the regular season. We could be down by then, or we could still be fighting for our lives. To be honest, I’m not sure if that potential new date is good or not.

And maybe, just maybe, our fate for this season may be sealed by then anyway…

In a nutshell: Piss off.