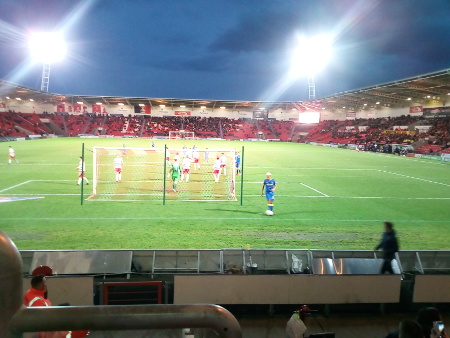 Relief. A strange emotion, especially as it’s not the heights that is euphoria or the misery that is despair. But it’s a welcome one, especially the night after Dons 0 Dons 0.

If there was a time to get a goal-less draw, this was it. An opposition on the metaphorical beach, a visiting side in danger of leaving it until the final day, and with an unexpected game in hand as well.

Never have I been thankful for so few chances in a game.

Seriously, I remember Appiah shooting and getting a deflection rather than it going in. OK, I also remember Donny having a lot of the play and matching us for accuracy (lack thereof). And that’s really about it.

Who knows what would have happened in the alternative universe where the game went ahead on Easter Monday, after the Fleetwood debacle? We would have probably lost that.

But we’re safe. And that’s about it, really.

Personally, I wouldn’t gloat too loudly today, unless it’s at the expense of Franchise. We’ve been down the bottom for a very good reason, and there’s still a lot of issues to sort out.

While being unbeaten since that less-than-Good Friday is more than commendable, we’d do well to remember why it got so bad in the first place.

And last night, I still had the nagging feeling that I had after Shrewsbury, namely there’s a distinct lack of quality all round and – perhaps worse – a continued lack of identity.

Whether it was fatigue, or nerves, or something else entirely, I still wasn’t sure what we were trying to be. There was a lot of hoofing, much of it without an aim, and it felt like we were waiting for something to happen.

Then again, I remember back, waaaaaaaaaay back in August at Fleetwood away when I said that something was missing. I don’t think we fully found it…

The post-mortems are for Sunday onwards. For now, we get to plan trips to next season without it being Port Vale or Grimsby, unless it’s in the FAC (I did originally write Mansfield, but then I’ve just seen they could sneak into the playoffs).

Instead our glamour trip is to Sunderland. Yes, that one. One suspects that will be the first fixture to be looked at when next season’s calendar comes out. And more than a few hotel deals to be devoured.

Mind you, there’s other potential gooduns, now that you can look at the Championship/L2 tables without trepidation. I think Lincoln going up could be a popular one, if the Stags don’t overtake them on the last day of the season.

The Championship? Back to the Macron, by the looks of it. While I expect it will be Burton for the final place in the drop zone, it could even be Reading – Reading. A venue your editor knows very well, and I think our media corps will rather enjoy working there.

Or Birmingham? They’re not out of it. The press facilities there aren’t quite so good, mind you. Hell, t’Barnsley for the traditional bleak Northern away day.

Oh, and Luton next season too. And Wycombe…

Plus points: We’re staying up. Franchise going down.

Minus points: Still crap though.

The referee’s a…: He was pretty decent for the first seventeen minutes, giving us free kicks and the like. Writing down this observation must have done something though, because as soon as I stopped scribbling he changed into somebody more petty.

Them: Their season is over, and I think it showed. Whether they would have won earlier in the season remains to be seen, but from our point of view I’m glad Easter Monday got postponed after all.

I forgot that Darren Ferguson is their manager, and like Nigel Clough – he’s never going to fully live up to who his old man is. Mind you, he did get a lot of sympathy from fans earlier in the year.

Seem a nice enough club, their Twatter feed congratulated us for staying up. Did have a weird encounter afterwards, when your editor walked outside to make a phone call, and was prevented from going back onto the concourse again.

As for the Keepmoat, it’s an identikit stadium, although I don’t have too much of an issue with those as it goes. Complaints about being “soulless” says more about the supporters inside them.

But it does make me glad that NPL is going to be in a built-up area with decent enough transport links and a good selection of grub/booze outlets around. That’s the flip side of out-of-town venues (like the Madejski too) – there’s simply not much else bar the stadium itself.

Hell, even the local McDonalds was being closed for refurbishment…

Point to ponder: How much will we miss anyone from this campaign? As in, really mourn their departure.

Your editor’s views on our management team are well known, and I wouldn’t be upset at all if he decided after Saturday that he’s gone as far as he can go with us (because he’s getting very close to that stage even if you think it hasn’t been reached).

I think he might regret staying on next season.

But I won’t shed any tears for any of this squad either. I don’t think we’ll even miss Lyle Taylor as much, who seemed a bit lightweight last night. Decent striker, yes, but I can’t see him being any more than a third/fourth choice striker for a Championship side.

Maybe Darius going would be the only one, if the rumour mill is to be believed. Possibly Parrett too, but that’s as far as it goes.

Why? Because we’ve gone stale on the pitch as well. Last night felt like the end of the road for a lot of these players, many of whom have been here since L2 days. Granted, they’ve knuckled down and got us safe, and they should be commended for that.

And as a last hurrah, it’s not a bad one.

This season was one too many for Robbo, and the same will apply to Fuller for the next campaign. To be fair to our right back, he put the usual graft in last night, but I still have nightmares about those two gifting Franchise their goal at KM in September.

I’m not going to expect any of our loanees to return, especially Long. The only one could be Abdou, who is likely surplus to requirements at Millwall.

All in all, the traditional end-of-season pitch walkaround on Saturday could be a poignant one. Might be worth taking along a body language expert on a spare ticket…

Truth is stranger than fiction: 1) Never seen so many road closures in one journey as returning back last night. Not to mention the speed restrictions on the M25 because of some mythical “congestion”. Metaphor for the season? 2) The bagpipe player outside beforehand. Yes, he was doing it for charity, but it still sounded awful. 3) 482 of us. But then, it was a new ground…

Anything else? OK, now you can laugh at Franchise.

Obviously, staying up brings its own set of emotions, but us being higher than they are next season feels like the ultimate vindication for us.

You can argue about being the “soul” of Wimbledon, and whatnot, but on the pitch is where it ultimately matters and that’s exactly what we’ve now done. It seems like we wanted to avoid the drop for this very reason alone.

And no matter how wretched this campaign has been, this makes up for it – and then some.

There were some great anti-Franchise songs last night, including the one that ended “Because Franchise are a proper club (are they fuck)”. You could sense that we’ve been saving this up ever since the first letter from Koppout in 2001.

But the real song that has the most significance was “You stole our club and you fucked it up”, because it was so blatantly true on so many levels.

And this is the ultimate humiliation for anyone associated with Franchise. Think of the “pub team” jibes, the constant attempts to rub our noses in it. The way they bigged themselves up when they reached the Championship.

They celebrated like they’d won the title when they finished above us, because deep down they knew what it meant. This time around, they’ve lost that one stranglehold they had on us, and even though they’ll never have the soul of a real club, this is hurting them big time.

We don’t have to deal with them next season, unless we get them in a cup. It’s possible the situation could be reversed this time next year (Franchise going up and the Wombles going down), as I expect they’ll stop hemorrhaging.

And while we’ll never properly flush them away, no matter how bad things got this season – there’s always somebody to laugh at who’s worse off than you…

In a nutshell: Job done. All you can say, really.