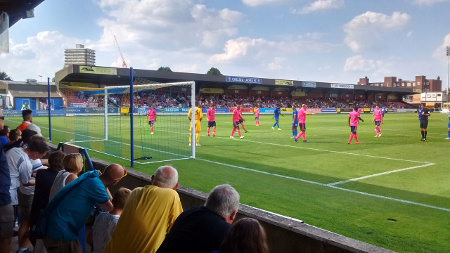 There was something a bit so-so about Plough Lane 0 White City 1 this afternoon. Another hot day, the curious absence of two of our three signings this week, and maybe a little reality check after Woking and Reading.

No, their late goal probably wouldn’t have happened if the first teamers had been on the pitch. Although Tom King must have been enjoying the beer festival beforehand, given the way he fumbled that.

I don’t think we deserved to lose, but then I don’t think we did enough to win either. Appiah had a good shot saved, Pinnock is still crossing the ball well, but like the previous two friendlies – we’re still going to need to add more players.

Whether that’s going to happen this week ahead I don’t know, especially if there’s going to be a training camp/bonding session/piss-up down in south Wales upcoming.

Apart from their goal, it was quite low-key and sedate, really. The youth teamers came on for the last ten minutes, but to be honest we might now be better splitting them off into their own PSFs.

Obviously, things should be picking up a bit in due course. There’s only three of these fixtures left, and at least we’re not trying to impose some avant-garde tactics that will fall apart upon the first contact with reality.

I would hope – and expect – by Brighton next week that we’ve come close to getting the full quota of players in. And hopefully they’ll get a bit more action than they’ve received recently…

Minus points: We lost. Not as good as Reading/Woking.

The referee’s a…: I’ll be really pushed some to mention anything about him. He didn’t get anything wrong, put it that way.

Them: Shame they’ve got a Dutch manager now, a club like QPR should be giving UK talent a shot. Still, at least they’ve got rid of that whining, bleating, droning tosspot Holloway.

Probably going at half-pelt themselves, I don’t think they would have won without our assistance, although they did force McDonnell into a save.

Fair few of them turned up from W12, and they did appear to have some history with King for some reason. At least they went home happy.

Not sure about their pink kit, especially as the numbers are difficult to read from a distance. They should really stick with the black/red ones, which always looked decent.

As an aside, after we return to NPL there’s the potential for a pub quiz question – which two Football League clubs have played in the same venue as the Greyhound Derby?

Truth is stranger than fiction: 1) The game halting after a minute because the sprinklers came on. Surely we could have played through them? Would have forgone the need for a drinks break. 2) The sight of the subs popping out the back of the RyPiss for, er, removal of fluids. With the sheepish look on their face upon returning, after a couple of fans twigged them.

Anything else? I’m going from memory here, but there were a couple of little tidbits in the Erik Samuelson programme notes today, in terms of plans for next season.

Not just things like bottle bars to speed up service (subject to local authority approval – and is it me or do Kingston council sound a little bit arsey?), or that getting a webcam for NPL isn’t that straighforward.

But this kind of stuff : it looks like we’re getting smart cards for the STs this season. Of which we’ve sold 2900 or so of them, by the way.

We’ve seen them at other grounds, and the paper stub method looks quite antiquated these days. The technology for smartcards is, apparently, pretty cheap and there’s not really any reason not to start going down this road.

Obviously, it’s going to be a trial run for NPL, and I don’t doubt there’ll be teething problems. It’s better to get that out of the way now than in 16 months time, but prepare yourself for something going wrong at the Coventry game.

Which is why one other thing we’re planning – a ticket office where the old Ks club shop was – should be a probability than a possibility.

SW19 has felt for a long time that we’ll need something like this at some point, and now that very stage has come. We’ve got too many punters as it is to deal with in a rabbit-hutch of an office, and like the smartcards – best to get the issues of having one out of the way before we return home.

An average punter will need somewhere to go to sort his ST if his card doesn’t function. Not to mention if he forgets it, and an emergency ticket has to be printed out on the spot. And I don’t think the current set-up for the comps window would cope with that.

It appears Chelski are pushing for this to come to fruition, although it’s good they’re making us look at things like this. And anyway, I don’t mind them putting more of a (literal) mark on KM – hell, it’s not exactly “ours”…

So, was it worth it? It was either that or England v Belgium.

In a nutshell: Meh.