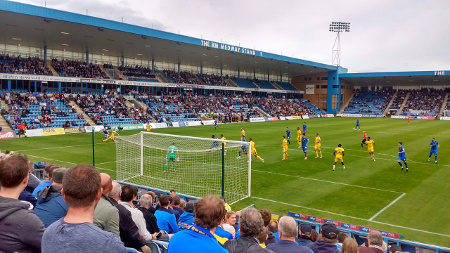 What a nice weekend…

OK – the pitch was awful, the entertainment rating would be about -2/5 and it was as ugly as the approach into the Medway.

But we needed Wimbledon Old Boys 0 Gillingham Old Boys 1 and then some.

Make no mistake, had we been approaching this Monday with a draw – or even worse a fourth straight league defeat – then the agitation levels would have risen tenfold.

As it stands though, we now get a whole week to ourselves without even a Chuckaturd to distract us. We haven’t had that since the first week of the season, and it was even starting to show a tad on Saturday.

We’ll need that break. Use it well.

The game wasn’t a classic, but it’s no surprise the one bit of proper skill won us the game. Arise, Sir Piggy, AFCW would be a far worse place without you this campaign.

True, that doesn’t put our other strikers in a good light, and more on that later. But while we should never try and win a game 1-0, this was one of those games where it was always going to be enough.

Even the save from King right – right – at the end didn’t mask how superior we were.

The bete noirs of last season, aka the Wardrobes**, seem to have come into this season with a new attitude. Last season was a massive jab in the rectal area for many after all.

** – Soares was called “Swares” by the PA bloke, which makes him sound like some purchase from Real Betis. Perhaps we can convince a big-spending Prem club that’s what he is? That will pay for NPL, quadruple the budget and even sort out Wagstaff’s beard grooming bill for a week.

It helps that both of them are playing with better squad members this season, and our midfield was definitely scything through theirs a lot.

As per contractual obligation, there’s still some nitpicking. Why Pinnock is on the bench I don’t know, and there’s still too many moments where we pass instead of HAFSOG. I suspect we will play better teams this month alone who will remind us of that.

But three points is three points, and the league table looks a lot healthier this morning.

NA called it a “classic” away performance afterwards, and some of the tackling was certainly nostalgic – I think that came from Division Three, circa 1978. At least pitches no longer resemble the Somme, though the one on Saturday clearly hadn’t been cut.

Still, classic or not – we need to win these kind of games and that’s exactly what we did. We shouldn’t ask for more, although maybe we could try scoring a second goal…

Minus points: We’d be fucked without our only goalscorer.

The referee’s a…: All football fans are biased about decisions against their team, but I see what people mean about the officiating at this level now. It’s never been good, but when did it get this bad?

Had we left Priestfield on Saturday with just a point (or less) I think I would still be kicking something this morning. Their manager certainly is, probably half their starting XI in a certain sensitive area.

Seriously, I was surprised how little they offered. But then, I think they’re like a lot of this division, ourselves included – can beat anyone on a good day, can shit the bed on a bad one.

Satan help the laundry people of Kent this weekend if you want to follow that analogy through.

I don’t mind Gillingham. I used to think they’re the sort of club we’ll eventually become once we’ve settled back home, at least until Brentford started doing well in the Championship.

You wouldn’t object to the two new sides at Priestfield to be at NPL, even if the temporary stand is more like some of what our new gaff may be like initially.

Like Oxford, it feels like we’ve always been playing Gillingham every season since Domesday. Though we didn’t face them that many times in the WFC era, and it’s only been since 2011/12 that we’ve come up against them regularly.

I’m sure some statto type can list all those who have played for both clubs – there’s been a fair few in the AFCW era alone.

One of those is a certain Mr B Fuller, who deservedly got a good reception before and after the game. Won their MoM, no less, though it would have been a season too far with us this campaign.

He genuinely seemed to appreciate it as he was the last one to walk off the field. Not sure if he did when we chanted the same after his 97th minute “effort”….

Point to ponder: Should we be seeing more of Jervis from now on?

I noted NA’s comments after the game about Piggot having to go up a gear because expectations are now higher (see the last paragraph). Assuming that’s throughout the team, can Hanson and Appiah justify their roles right now?

Unfair, perhaps, but I definitely sensed a cool attitude to both of them on Saturday, especially with some around me.

Both badly need goals, and to be fair to Hanson he did hit the bar, but not scoring (semi) regularly is going to kill both of them.

And the problem is this : what you do with both of them right now? Give them further runs out? Fine if they do find the goalscoring trail, but Saturday hinted that may be some way off.

Drop them and give Jervis the nod instead? We’d have to play both in u23s just to try and get them to find the net, which will totally fuck their confidence up if they don’t.

Something else entirely? I genuinely don’t know, but we’ve discussed it so many times in recent weeks/seasons that it’s just becoming a broken record.

So instead, let’s look at the man we shouldn’t really call JJ, but probably will. He apparently impressed in the Chuckaturd, and the predictable response to that will be – he can’t do any worse right now.

There would be undeniable pressure on him to start taking the weight off Piggy’s shoulders, and he’d need to get a goal or two PDQ as well.

I shudder to think what happens if he turns out to be yet another AFCW striking eunuch, but somehow one expects he’ll be given his chance sooner or later…

Truth is stranger than fiction: 1) It’s always fun to follow another fan home, especially when they don’t recognise the vehicle you’re in as you overtake them (hello, Secret Agent). 2) Practically no atmosphere, although being kein Dach up the away end didn’t help. 3) Speaking of the away end, who the hell calculates potential turnouts for our travelling support? Stevie Wonder? At least there was room to put the extra 300 or so…

Anything else? I haven’t really read the NPL revisions that have finally been submitted to LBM, although the club’s little update last week should be sufficient.

It’s pretty standard stuff, really, and I assume it’s being done to lessen the cost of the build. Although it should be future-proof, most of it doesn’t need to be beyond functional.

I also haven’t really gone into the share issue thingy that we’re considering, but I don’t think with the best will in the world the rank-and-file have the money to raise that level these days.

It’s not like the very early days of AFCW, when people really did sacrifice holidays and dental work to put the money into this new venture that may not even last.

In 2018, more and more “ordinary” punters either can’t, or won’t do so. But then, for something this large, I get the feeling it’s not really being aimed at them…

This kind of venture is more likely to attract those who can put in £300,000 rather than £3000 or £300. Perhaps not even those from within the UK, if we’re mentioning sums in Euro as well.

We have some pretty wealthy supporters – or sympathisers – and I wouldn’t be surprised if this is simply a mechanism to get their money without scaring the horses.

You might not be able to officially dictate policy if you have that sort of dough, but you can certainly bend the ears of those who make the ultimate decisions. Witness the Yellow and Blue Club for a lower level example of that already.

I’m sure there’s semantics aplenty, and no doubt some very heavy nods towards the corporate accountancy side of things. PWC Wimbledon, not AFC Wimbledon. But given what the end goal is, I’d be genuinely amazed if it didn’t pass.

One final thing about the resubmitted plans – there’s no creche and no cafe. Neither of which we’ll particularly miss. Though if anyone is still thinking of opening a chippy, your editor was over that way last week and saw two empty shop units on Garratt Lane near the kebab shop…

So, was it worth it? Indeed.

In a nutshell: Seven days with a post-victory glow. Lovely.