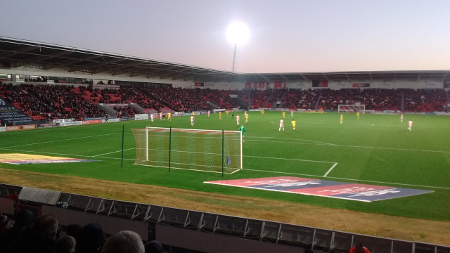 Well, if Dons 2 Dons 1 doesn’t confirm it for you now – we’re in trouble. Quite deep brown stuff as well.

If yesterday proved anything, it’s that a new manager is going to need to stamp his authority on this rabble, and do it pronto. Because to lose 2/3 on the spin is one thing, and 3/4 is another.

But this is now EIGHT straight losses. And the players can no longer blame the manager.

OK, this game proved that Bassey shouldn’t be in charge any longer than needed, and to be fair to the players they played OK – for a while, anyway.

Our goal was good, and well worked, and it does make you wonder if there’s something that can be salvaged from this particular group of individuals.

But the way we let them get back into the game so easily tells its own story. And then we got progressively worse again…

I’m not that surprised Donny scored late on, because a horrible realisation struck me during the game – not only are we so mentally flimsy, but we’re physically feeble as well.

There has been the occasional Chinese whisper that we’re under-trained, not just in tactics but also in the actual ability to concentrate for 90+ minutes too.

I didn’t see Shrewsbury, but to let a lead slip twice in two league games, and turn possible wins into losses is unforgivable. Especially with a backdrop of so many defeats already.

We have a lot of problems – poor tactics, poor recruitment policy, incoherent style of play – but the fitness aspect has to be one of the most damaging.

During the game, it was shocking to see how much these players started wilting. We were being half a yard slower, becoming increasingly mentally drained, and it was no surprise that our concentration finally buckled.

What’s clear now is that we’ve somehow – somehow – got to get this bunch of wage-stealing morons to January 1st 2019, without being fatally damaged for the season. We can effectively write off Southend and Peterborough at this rate, and I guess BT Sport will get its upset for the FAC after all.

You can’t blame anyone who watches us even semi-regularly to be totally fucked off now. That I think explains the post game reaction here, which if anything was even louder to listen to in the flesh.

And while I didn’t join in, I do not blame anyone who did one bit. I happen to know some of them, and they put their money where their mouth is – they’ll the ones who will be there for Halifax or Morecambe at the god-awful kick off time.

They’re there most games, if not all of them. They’re the ones who face the train delays, the motorway hold-ups, who pay their money (which they may not even have), and they’re the ones who see these alleged professional footballers shit the bed once too often.

They’re not stupid. In fact, they’re a lot more wise than some of the people condemning them.

Compare and contrast to the same venue in May, which somebody linked underneath that. Like night and day, isn’t it? But back then, we had genuine characters and leaders, like Darius and Parrett, and Fuller, and even Lyle Taylor.

All now gone, and as somebody said a week or so ago – all turfed out by a manager who possibly thought last season’s escape was down to him.

Yes, Ardley got a nice load of reviews upon leaving us, but he’s left us with an absolute fucking mess. And one it’s going to take a while to unravel…

Plus points: Our goal.

Minus points: Plus ca change.

The referee’s a…: Of course, it’s not helped when you don’t even get what looked like a good shout for a penalty right at the end…

Them: They weren’t special themselves – your editor covered them at Charlton a fortnight ago and they weren’t much better then – but were wise enough to wait until we made the inevitable mistakes.

And just proves that most of this division remains a much of a muchness.

Decent strike for their first goal, to be fair, though their second was as much down to our supposed defending as much as anything. But then, it had a degree of inevitability.

Even though it’s an out-of-town venue, I quite like the Keepmoat. The views are decent, it’s intimate enough, and I bet if you had 2000 or so in there it would be a helluva racket.

I expect NPL to be a little bit like it. Although their walk-in bar area was a little bit sparse and lacked character (and their Sky Sports feed kept breaking up).

Their PA clearly found an 80s compilation tape beforehand, with Talk Talk, Talking Heads and Heaven 17 to name but three. Unless they’re the newest releases in south Yorkshire.

They have a lake behind one of their stands, and you have to wonder what’s down the bottom of it. Rare coral reef? Bicycles? Corpses of Rotherham fans? Although if they could dredge it and find a spine, we’ll have it…

The answer is “yes” by the way, in case a member of the club’s board accidentally strays into reading this site. Not sure if he properly wants the position anyway, and it would be a major step backwards if he was appointed.

I assume he had carte-blanche to do something different yesterday, so it’s pretty clear by his selections that he was as much part of the decision making as Ardley and Cox were.

Appiah up front on his own, Piggot on the bench, Pinnock coming off half-way through. Could have been the old manager phoning through instructions. With the same outcome in the end.

From his point of view, he might think his time at AFCW is coming to an end too. Yesterday wasn’t even the little bit of a lift he gave when he stood in for TB, and that’s a classic sign of somebody who doesn’t make much difference now.

I know he’s been here since the CCL days, but that’s true for a number of other people at the club who are going past their use-by date.

To be blunt, yesterday was cowardly by Bassey, because he didn’t do much different when he could have done. Starting Piggot and Pinnock together would have been a statement of intent, if nothing else.

Steven Reid was doing some of the talking to the players during an injury break, and I wonder what he’s thinking right now about what he saw.

One does wonder if the players themselves aren’t massively fond of their interim manager, because they were publicly bawled out by him when NA decided not to face the post-match interview at one recent game.

Truth is stranger than fiction: 1) No chants whatsoever for Bassey, and a NA one that lasted for about six seconds and was sung by as many people. Guess we’re all moving on. 2) Second half delayed by a drone. Insert own joke here.

Anything else? No doubt you’ll hear the phrase “interesting times ahead” a fair bit in the upcoming period, and anyone who says it will be absolutely right.

So, where are we right now in such, er, interesting times? In the shit, for starters, and to start off – it seems like NA’s departure may end up becoming more messy than just a straight forward goodbye.

There is apparently (and I stress, “apparently”) a fair amount of truth in this snippet in the Mirror from earlier this week, and given there’s conflicting stories from the ITK types about whether NA was pushed or whether he jumped, makes it all as clear as mud.

We’ll wait and see, but it would be fitting if it did turn out to be accurate.

That’s the past. To the future we must look, and with luck we’re sorting out through the CVs sent in this weekend. I haven’t read what the Football League Paper said today, but apparently we’re interested in Paul Hurst.

Could be agent-speak, of course, and the snippet of the story suggests Shrewsbury and Notts County are interested as well. But if we are looking for that type of manager, at least it suggests the club is taking it seriously.

Which it has to do, because the post-game reaction shows just how fed up many are with AFCW right now, and that can manifest itself further in ways one cannot predict.

It was quite interesting (that word again) getting a couple of vox-pops from people yesterday, because it’s surprising how lukewarm they appeared to be with Wally Downes getting mentioned.

And I’m in two minds about him myself. He’d certainly throw a couple of players up against the wall and demand passion. And some of these players need publicly dressing down.

But beyond that, he was last manager of an English club in 2004, although he has been at Indian Super League club ATK assisting Steve Coppell recently.

Would he even be mentioned without the ex-Wimbledon connections? Probably not, and unlike NA – most under 45 would have to look him up on Google.

The impression I got from other people yesterday is that if you gave them a choice of Hurst or Wally, they’d pick the former Shrewsbury and Ipswich boss in a heartbeat.

And I guess the feeling is that while Hurst (or another type of manager like him) would be a fresh start, the guy behind the Magaluf Shuffle would be yet another appointment steeped in nostalgia and sentiment.

Depends really if he brought in Coppell (or somebody of that caliber but younger) beside him. And whether he’d be here until the end of the season and we go from there.

Whoever it is, January proves just how big a contacts book they will need. Not just to get players in, but half this sack of shite out of the club. A few favours to get some of our dross off the books/on loan may quickly need to be pulled in.

What’s the point of, say, Appiah staying on any longer than necessary? He looks finished, and yesterday he did a run and was dispossessed because he absolutely refused to give it to a team-mate in a better position.

I feel a bit sorry for him, as he’s here because of NA’s appalling lack of judgement, but he’s a passenger. And we have too many of those. The reaction to Jervis coming on was as silent as a Franchise home game, and he did nothing to answer it back.

I forget how many loanees we have, though both Jervis and King should be sent back on 1/1/19 to whence they came. Even a couple of Darius/Parrett type leaders could do something, because this lot were seriously lacking in direction again yesterday.

We can still stay up, though it will be tight, but we’ve really got to get it right in the next couple of weeks. Not so much on the field, but off it…

So, was it worth it? *snorts condescendingly*

In a nutshell: Can we break all records and get the ninth straight loss next week?