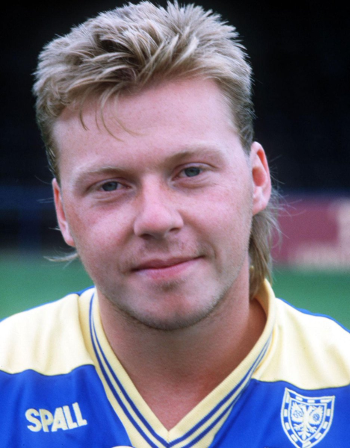 So, welcome (back) to Wimbledon one Mr Walter John Downes, as our new manager. The first ever WFC apprentice, the originator of the original (and best) Crazy Gang, and somebody who used to run a fruit-and-veg stall inbetween training sessions.

Also, welcome back to Glyn Hodges, one of the more under-rated (and perhaps underappreciated) members from that time. Former Welsh international, current Welshman and somebody we’d kill to have playing today.

Leaving aside the slighty terse headline (would it have really killed the club to have written “Wally Downes new AFC Wimbledon manager”?), it’s nice to finally get that bit of closure on something that’s been dragging on a bit too long now.

While Bassey and Reid have done well to steady the ship and get us into that mouthwatering (?) FAC game at Fleetwood, we’ve needed to settle this position once and for all.

I understand the need not to rush into an appointment, and we’ve been lucky that we’ve only had three league games since NA departed (of which we managed to win one), but I wouldn’t have wanted to face Rochdale with our interim guys still in charge.

Reid is now gone, although he wasn’t going to stay beyond helping out Bassey anyway. Our own Tony Parkes-like figure remains, and the rest of the staff remain in place. Not surprising really, as you can have too much upheaval.

Let’s get the obvious gripes out of the way first. Yes, there’s a fair bit of nostalgia to this appointment – I doubt either WD or GH would be here today if it wasn’t for Wimbledon. Although that’s something that can work both ways – Neil Harris is beloved at Millwall, for example.

I have to be honest, that’s what made me (and others) lukewarm about his name getting mentioned. At least, until it was clear that the likes of Paul Hurst, Brian McDermott and even Alan Pardew hadn’t even bothered to apply.

Once rumours that the likes of Nolan (who at another time may have been the best choice), Russell Slade and Shaun Derry got mooted, even the most unsure were rushing for their old Spall tops.

Yes, WD’s previous managerial job was Brentford over a decade ago, although that’s still a lot more experience than the previous manager we had. And his coaching CV since then is a pretty decent one (as is GH’s).

I’m not so bothered about him coaching in India for the last two years, because with the influx of foreign coaches that’s often the route those sort of individuals have to take. And at least he’ll have experience of different footballing cultures.

As for the whole Twitter thing, which was a bit of a surprise to read on the announcement – I’ve seen what’s supposed to be the “worst” of them, and they’re nowhere near as bad as some Franchise fans/SJW types will have you believe.

Maybe a bit ignorant, and/or ill-judged attempts to be funny, although TBH I’d be surprised if a working class lad from West London of that era didn’t have similar views. And don’t think what he’s written isn’t shared by many in football much younger than he is…

It’s pretty much nipping it in the bud, and taking it head on now rather than let it come back down the line. Just ride out any grief for a day or two, and by the time Friday comes it will be forgotten by everyone except the obsessive types.

And if it isn’t, chances are there might end up being some sympathy towards him after all – a backlash against the backlashers for backlashing…

Anyway, the important thought right now is this – this appointment feels right.

Why? Well, it is about identity. Not just because for many of us, Downes and Hodges are of the old PL era that we grew up with, but because of what’s happened recently.

There’s only so often you can comment on exactly the same thing over and over again, and last year especially was particularly horrifying.

That’s just the views of an AFCW fan of 30+ years. Some of the comments I’ve heard in that time from the non-affiliated without an axe to grind have been even more damning – that we have been the most “un-Wimbledon” type side they’ve ever seen.

And that’s not in a good way.

So if you want to know why so many people have a spring in their step returning today, that’s partly your answer. Today, it feels like a bit of Wimbledon has returned, and we’ve forgotten what it feels like.

Yes, it could go badly wrong under WD (I nearly wrote NA just then – a force of habit), and yes it could just be turning the clock back to 1983 and Crispins on the shirt. Though after the recent turgid shit, I’ll take even the 1963 Amateur Cup days.

But then, if nostalgia was something to be avoided at all costs  – we wouldn’t have NPL to look forward to.

Sometimes, a club needs to reset itself, to reboot to what it was. No, AFCW in 2018/19 isn’t going to be WFC of 83/84 all of a sudden, but that season was as much whole-bigger-than-the-sum-of-the-parts, and that’s no bad trait.

If you were to read SW19 over the last 24 months or so, you’ll doubtless see comments about how things have reached the end of the road in some aspects.

We might have turned the clock back today – but have we? If anything, we feel a different club today, with a renewed sense of purpose.

It might be misguided to think this, but right now you believe again. We’re seven points away from safety, and our squad is lacking in quality and then some, but for the first time in a while you have that bit of faith returning.

True, it will probably evaporate a minute into the game on Saturday, but AFCW has been properly kicked up the arse with this appointment. And by fuck it needs it.

And why this upswing in optimism again? Because we’ve got at least some of our identity back – what makes us, well, us…

I know the previous manager kept us in L2, helped build up a previously non-existent youth system, got us into L1 and for two seasons kept us there. He deserves all the credit for that.

But under him, we became something we’re not, and never could be.

Our very DNA is slightly wrong side of the tracks, the house near the industrial estate with all the heavy lorries. We’re not the corporate solicitor buying flowers at the station, we’re the guy selling him the tulips to begin with.

Sure, we have plenty of middle class, respectable people following us, but they understand what I mean by that.

Wimbledon is not the polite bank clerk, or the ever-so-obliging girl who serves you at John Lewis. Or those in the NTNOCN parody of Ask The Family. That’s not us. That hasn’t been us. And it will never be us.

He might be a bit more uncouth than previous managers, but WD is more identifiable and relatable to a Wimbledon fan. Ditto Hodges.

I hated what AFCW had (has?) become, yet today I feel more connected to it than I have for a long time. Maybe the TB days in the Conf/Conf South was the last occasion I felt like this, and that’s a long time ago.

But both our new appointees are more than that. They’re clever, canny people. And that’s ultimately what I’m expecting from their appointment – rough exterior, but with a lot more nous than they’re given credit for.

I only saw the back end of WD’s time with us, ditto GH’s, but both were considered a lot more sophisticated in their thinking than their image portrayed.

The “original” Crazy Gang has some alumni who went on to some good things – WD at West Ham/QPR/Reading, amongst others. You don’t get those jobs without having something about you.

Hodges was with the Stoke u23s from 2013 until this year, and I think he’s been at other high levels too. He came later on, but Andy Thorn is a talent scout at WBA. Alan Cork scouts for England, apparently too.

They’re just the ones I know off the top of my head, but that’s some pretty impressive current CVs from a bunch who were considered alehouse brawlers.

Except if you ask some of the older hacks I’ve know who covered WFC back then, who didn’t like us, they still respected our work ethic and how much smarter we were than our persona was…

And that’s why Wally and Glyn are good appointments, because while I can’t deny somebody like Brian McDermott would have been best of all, he and his ilk weren’t touching us until NPL (if at all).

Indeed, how different may today have been if Kevin Nolan had accepted the offer apparently given to him? We can thank his agent, or if you believe the conspiracy theory – the fact he’s a mate of our new manager…

This appointment has made me realise just how important emotion is to football supporting. It’s why people got up at 5am to go to Halifax Town last Saturday for a 1230 kickoff. Something your editor watched in the Reading press room, and thankfully I managed to miss the first 42 minutes…

Looking at it dispassionately, Wally Downes doesn’t make sense as an appointment. But add the gut feel to it and it makes perfect sense after all.

It could all go badly wrong, and WD and GH become two more failed ex-heroes. But already for Saturday, you now expect the players to go that extra yard. And if they don’t do it, they’ll have a management team who will quickly remind them of that.

As Steven Sylvester proved a lot in the last couple of years, what’s between the ears is as important as what’s drawn on a whiteboard. Probably more so.

Your editor is trying to get into the press conference for whenever it’s scheduled, and I’ll update next after that/the planned MTM. One thing is clear though, never has a game against Rochdale been so eagerly anticipated….