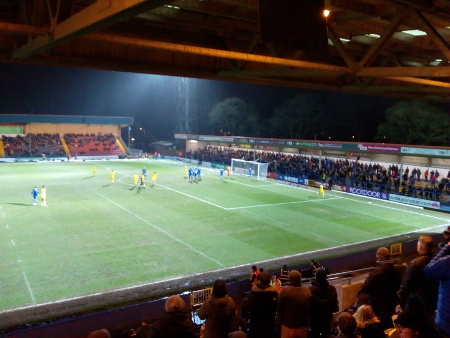 Could we? Could we?

It’s probably just as well I’m typing this close to 24 hours after Gracie Fields 3 June Whitfield 4, because I think I’m still coming to terms with the outcome.

Football supporting can be hazardous to your health.

Describing this game as having everything is an understatement. Early goal? Check. Crap defending? Check. Goalscorers finally finding the net? Check. Despair to elation to despair again in the space of about two minutes? Check. Last minute penalty? Yes, we even had one of those…

And a general sense of elation and slight bewilderment too.

I think it was going to be one of those nights when the game kicked off seven minutes late because of an issue with one of the goals (cue “We always get shit nets” from our contingent).

That feeling got compounded after about two minutes, when the defence feebly “attempted” to clear a set piece. 1-0 to them, and I think everyone just sighed and shrugged their shoulders.

To be fair, after that we were starting to find a bit of composure, although nobody seemed willing or able to talk to each other. There was more communication and backchat between our supporters.

And too many times last night bought home just how little quality we have.

Which is why Pigott scoring was as shocking as it was welcoming. No idea who his “cupped ear” celebration was aimed at, hopefully not our support.

I can only guess that the surprise of finding the net must have confused our players, because that’s the only reason I can think of why we went behind again so quickly. Are we dozy as well as crap?

Mind you, this game had one of those strange feelings that something was going to happen, perhaps even with a final twist to it. That may sound being a bit wise after the event, although I’m not going to pretend I knew we’d win it.

A point would have (sort of) done me, which we were on course for about a minute after the restart. That must have been one helluva team talk by Walter, because we came out firing. Just like last week at the Bescot, it got us a vital goal.

While Walsall was a bit more composed, and comfortable, this one showed that we do have battling qualities after all.

Funnily enough, it didn’t show when we went 3-2 up (just after the lesser-spotted Jake Jervis reminded us he was alive) – although that release of tension when Wordsworth netted told its own story – but when it went back to 3-3.

You can guess how weak our defence looked when somebody made a run at it, although Rochdale had been looking threatening again by then.

I know we were after the win out of necessity, but it was still pleasing that we at least attempted to get all three points. Which showed as we forced a few corners, albeit with as much firepower as a castrated mole.

Then came the 95th minute…

Any football supporter who does away games will know what I mean when I say we had the Holy Grail moment. Which came with just one more ball into the box, one of our players taking it on, and a Rochdale player duly obliging.

The last minute penalty away from home to win the game. A nightmare if you’re in the press box filing copy on the whistle, but it’s the scenario that makes so many other wasted trips worthwhile.

The home fans and players weren’t happy, but even with my neutral cap on, it looked pretty nailed on.

After watching the replay, I didn’t know it was almost literally the last kick of the game (I thought we had two minutes extra, enough time to make it 4-4). Which makes Piggy’s nerve in taking it ever the more impressive.

Waiting to take a penalty can’t do much for the bowel movements, and one away from home adds to that. But in a game where you need the three points badly? And for your hat-trick? Not to mention the first AFCW penalty since Domesday.

Anyway, Pigott stepped up, slammed it home, and you can guess the rest. My throat is still sore, by the way.

Ramsdale did his reptuation no harm, pulling out a couple of important saves and acting like a loon after the whistle. Walter himself joined in with a few high-fives of the crowd – he had some smile on him.

I note his comments on the OS about silly mistakes, especially as I saw his reaction after the Rochdale third goal. I think he would have sacked the entire defence there and then if he could.

So, what? Make no mistake, this was a vital three points. Time will tell whether it has the same effect as winning in similar circumstances at Walsall last year, but right now there’s a little glimmer of hope.

As said earlier, a draw would have been a little bit helpful but only a smidgen. Had Piggy not netted that penalty, the mood would have been a lot more dampened. As the aforementioned reactions afterwards by the squad suggest, they knew that as well.

There’s still thirteen games to go. We might have a few more twists to come.

Minus points: Shite defending. Not holding the lead.

The referee’s a…: Doubt if we’ll see him again, to be honest. Right now, he’s been summonsed to the PGMOL headquarters to explain why he gave AFCW a spot kick, and will be sent to shack up with that ISIS bint as punishment.

Them: Like Walsall, another team that are struggling to avoid the drop. Unlike Walsall, they were able to find the net (albeit with plenty of help from us).

I don’t think we were any worse than them, although they had more of an idea at times what to do. Which isn’t exactly difficult, to be fair. But like ourselves, and like a lot of teams in L1 – they can’t defend that well.

Only 2,410 there last night, and some of our lot panic when we get gates under 4000. But then, like Bury and Oldham, Rochdale have always struggled to get support considering the two big clubs almost on their doorstep.

Their PA bloke was reading out details of their game against Luton a bit too enthusiastically, it has to be said. Oh, and it appeared Ramsdale upset a couple of their 12-year olds…

Point to ponder: Dare we dream?

To be honest, despite the heroics last night I still expect us to be in L2 next season. I think it’s because we won’t get away with the obligatory sloppy mistakes in defence that we saw yet again at Spotland.

But despite that, we have won our last two games in the league. And there’s something to be said for such a run of results.

Nobody expects much from Charlton on Saturday, although it would be nice for home fans to have an enjoyable afternoon for once. And I don’t know what the points gap is right now, but I would guess it’ll widen again come the weekend.

That said, there’s some guts being shown now. Maybe not often enough (ref: Fleetwood/Burton), but you don’t win matches like last night without them.

WD is talking about thirteen cup finals between now and May, and he’s right. While deep down he probably thinks we’ll go down too, he certainly wants – no, expects – us to go down fighting.

And scrapping might be the one thing we need.

There’s a definite spirit growing with this set of players again, even if the lack of characters is painfully evident. The way we kept attacking right into injury time was good to see, and we got the reward for that.

That wouldn’t have happened earlier in the season, and not just under the previous regime either.

Whether it’s because the players are realising it’s now the business end of the season and many will find themselves out of a job if they go down, we don’t know. I hope it is, because it will force them to try harder as a result.

After all, if you’re going to go down – go down as a hero. At least it will help you when you’re negotiating to join another club…

Truth is stranger than fiction: 1) I believe it’s the first time we’ve scored three goals in a League game this season, let alone four. Nuff sed. 2) Why are we not leaving somebody up at opposition corners? Is the Archangel of Death hovering over us like a ghoulish reminder from the past? Or Neil Cox, as he’s otherwise known as.

Anything else? So, farewell Liam Trotter.

He’s finally been allowed out of Wally’s woodshed, and been given a one-way ticket to Orange County FC alongside Harry Forrester. Given his nickname, he’s already been dismantled and put in a flat pack.

And that’s what he’ll always be remembered for – being one of los Wardrobeles alongside Abdou (remember him?) and Soares. Now there is only one of the Axis of Sloth, and he’ll likely be out by the summer.

Trotter kind of summed up the latter stages of NA’s transfer policy. A player signed from a higher division club for not-small wages (though apparently he wasn’t the drain on the payroll that some think he was), without ever acknowledging why he was ready and willing to join us.

Jake Reeves he wasn’t. And he was certainly no Danny Bulman, a midfielder we have yet to replace even remotely properly.

Our previous manager almost built the midfield around him and his fellow IKEA products, which is why WD yanking him off at the Chelski Chuckaturd was so symbolic.

I would mention about his playing career with us, notable performances etc, but in truth I can’t think of any. The only thing that reminds me he played for us were a few infamous Instagram videos of him nightclubbing.

He wasn’t alone in that, of course, and the whole Jaegerbomb Squad bollocks summed up how bad things got this campaign, but considering W&G were keen to give everyone a fair crack of the whip, he went AWOL very quickly.

By the sound of it, we didn’t need to pay him off, and we may find out what kind of influence he had within the team. We certainly didn’t miss him last night…

So, was it worth it? Too bloody right it was.

In a nutshell: The fightback continues?