Still at the wheel 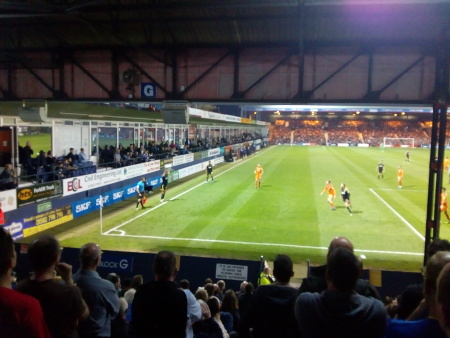 And the life support machine continues to beep…

I’ve used the word “massive” after a couple of results in 2019, and Probably Going Up 2 Possibly Staying Up 2 may prove to be even more so than previous results.

Make no mistake, this Easter could have gone wrong. Badly wrong.

But we’re still in the same position as we were before Friday, and now we know what we need to do.

More on that later. I think there are some of our fans still on the ceiling after last night, and it might be a while before they finally deflate.

Let’s be honest here – luck was on our side.  At times there was definitely a two-division gap between them and us, and we were thankful that a) Ramsdale had another blinder, and b) Luton’s strikers were paying homage to Jake Jervis.

It was a poor start, them scoring just felt a bit too easy. Which is why us equalising through Piggy was as much of a shock as it was welcome – I think that was our first real effort on target.

Of course, they scored again. And really, after that they should have buried us.

If we’d lost 4-1 last night, I don’t think we could have complained. But as football has proven so many times over the years, if you’re 2-1 down and the opposition have failed to put you away – you’ve still got a chance.

Christ, how many times have we been the ones to let it slip?

We started to play like we knew it. We’re not a particularly good team, there’s still an all round lack of quality that showed itself up again last night, but I cannot fault our battling qualities these days.

And battle we did. Whether it was just because we knew we could still get something from it – Walter’s half time team talk clearly worked** – or whether it was a reaction to Good Friday, who cares?

Connolly came on, and his pace gave Luton something to think about. I have to be honest though, when it got to injury time and Hanson headed Sibbick’s cross wide, I thought that was it.

Yet in games like this, you just need one more chance…

I’m not sure what came off worst in that celebration – either the players for the bundle (and has anyone seen Wordsworth since he went crowd surfing?), the fans behind the goal or Mikey T’s vocal chords.

But that was worth it. And then some.

It all seemed to happen in slow motion, which I guess added to the sheer exuberance of it. Bit like what happens in movies when the big moment happens just to enhance the drama of it.

The squad’s celebrations afterwards may look premature to the outside observer, but everyone there knew what it meant. It wasn’t a win, but it sure as hell felt like one…

So, what? Well, looking at the league table this morning is better than it might have been. We’re still in the drop zone, and a point from safety, but it suddenly looks do-able again.

It still doesn’t change the maths – we simply have to get a point at the barest minimum on Saturday and hope other teams do us a favour, but ’twas ever thus.

But our equaliser put other teams on edge, if trawling around other teams’ forums last night was anything to go by.

Plus points: We drew. May be most massive point of season. Battling qualities. Piggy. Ramsdale’s saves.

The referee’s a…: OK, be honest – who laughed when the lino fell over and had to be stretchered off? “You’re not fit to run the line”, indeed.

As for the man in the middle, I can’t remember him doing too much wrong, though thankfully he didn’t award Seddon a second yellow for the celebration.

Them: I expect they’ll still go up, probably as champions, as like ourselves in the Conference South season – those last couple of games are always the worst.

But boy did they throw it away last night.

Can see why they’re top, they had a lot more pace than we did, and they should have stuffed t’Stanley by more over the weekend. But they’ll probably go straight back down if they don’t strengthen in the summer.

I know there’s a bit of a dewy-eyed romanticism about the dwindling number of “traditional” grounds, like Kenilworth Road and Griffin Park, but the sooner they get their new place built the better.

Your editor is hardly tall, but even my knees were banging in the seat in front of me. No wonder people stood for the whole game. And it’s why for all the nostalgia, it’s a reminder just how shit a lot of these old venues really were.

The locals seemed to take the result with good grace last night, to be fair. Though one suspects they weren’t keen on being reminded of Eastlands…

Point to ponder: Did the players take on board the post-Brizzle Rovers comments as much as Walter’s half time team-talk?

If, like your editor, you felt after Good Friday that this lot wouldn’t be able to dig out results in the last two games – you would be justified.

That may yet come to pass, but the celebrations afterwards said something a bit more than getting a last-gasp point against the leaders.

Had we lost last night, there would have been that real sense of the momentum finally fading. And while the final two games are certainly no slam-dunks – you sensed an uptick after the game.

Part of that is focus, which is something I think we lacked on Friday and against t’Stanley. But also part of that is knowing that we’ve come through those fixtures (and last night) and we’re still alive.

In other words, we’ve been given yet another lifeline and this time we’d better take full advantage.

I’m sure there’s some in-depth psychology study about being in a last chance saloon and knowing that you’ve got a second chance. Or in our case, a fourth or fifth one.

When the players next go into training, they’ll undeniably be like a dog with two dicks over the Luton result. But I hope they also realise that after Saturday, it could count for nothing…

Truth is stranger than fiction: 1) Knowing the ins and outs of car parking in Luton. Don’t ask. 2) A last minute equaliser is not a good time to remember you’re wearing glasses.

Anything else? OK, I admit it – I’ve looked at Saturday’s fixtures this morning, and started looking at the various permutations.

And don’t bullshit me – many of you have done the same.

To save you looking : we play Wycombe (in case you’ve forgotten), Scunny host Bradford, Walsall are at home to Posh, Plymouth travel to t’Stanley and Southend are at Rochdale.

I suppose the only thing that can’t happen this Saturday is us securing mathematical safety. Even if we win, and Scunny/Plymouth/Southend all lose, it will still be too tight to breathe easily.

So here’s what we do know : lose to Wycombe and we’ll be praying on Bradford, t’Stanley and Rochdale to do us a big favour. If not, we’re down.

If we do fall to a defeat on Saturday, we would deserve relegation, because while I mentioned final chances previously – we do still have to take them.

A draw does feel as equally likely as everything else, and again that may or may not help us one bit. It depends on how benevolent other teams are. It won’t make the Bradford buildup any easier, though.

Which is why we simply have to focus on victory against Wycombe.

Simply put, we won’t stay up if we can’t win one of our two remaining fixtures. Not for the mathematics, we can (just) survive with two draws, but because I fully expect one or more of our relegation rivals to pick up points.

Scunny should beat Bradford, and we have to work with the assumption that Plymouth and Southend will get lucky and get wins themselves.

I don’t go in for this they-won’t-get-another-point complacency, because this season should teach you otherwise.

You can read the Plymouth forum and read the talk about their manager losing the dressing room, for example, but if we can get a win at this most critical time – so can they.

So we have to do our job and basically forget about everyone else. It’s sobering, but we really could win the last two games and still go down.

That would be the cruelest of all ironies, and we would be immensely unlucky if that was to happen.

I don’t think it would come to that, and two victories should do it. The problem right now is that we’re the draw specialists – we’ve forgotten how to win games.

Our home form, amongst other things, has crippled us. We’re due a victory at KM, but there’s no guarantee whatsoever we’ll get it when we need one the most.

How W&G approach the next couple of days training could well decide our fate, because they’ve got to work out how to break that cycle of failure at KM that’s practically embedded.

The game is sold out, and expectancy has risen again. But now is not the time for us to revert to type…

So, was it worth it? Quite possibly.

In a nutshell: Still not dead.