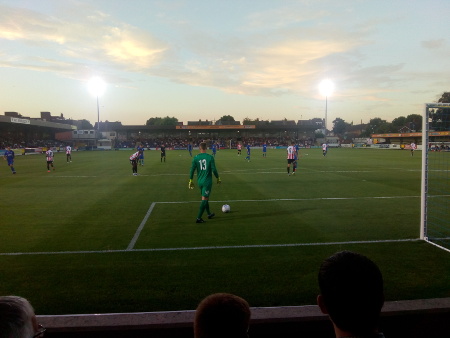 Do I have to do something about losing 3-0 to Brentford in a PSF?

I’m not going to spend a massive amount of time on this, to be honest. It’s the summer, it’s the weekend, we’re in the middle of the tennis tournament near Southfields, and it’s “only” pre-season.

And really, I’m not sure what else to say.

Here goes, though. There was obviously some ring rustiness, although for the most part the starting XI held up well.

Defence wise, we look solid enough, though Nightingale and our new keeper will doubtless be worked harder in training after their first goal. Better to get that out of the way now rather than against Rotherham.

Nesta continued to impress, showing some frightening pace at times, though one must always be wary of the Derek Duncan Syndrome**.

** – the yearly reminder that the DDS is named after our alliterative left back from non-league days, who looked world class during the friendlies and world crap when the proper games started.

Up front needs more work, though. Appiah missed a glorious chance, and I hope we don’t have deja vu with him. Roscrow got a harsh introduction to life this side of the Severn.

Maybe a bit disjointed at times, and there were a lot of aimless hoofs up front, although this is the first “proper” PSF and the players have been back a mere fortnight.

The reason we lost 3-0 rather than 1-0 was because of the mass changes we made, with a defence where most of them will be on loan in the Conference this season.

Still, Piggy looked lively, as did McLoughlin. And most importantly of all, I expect things have been learned, and will already be taken on board by the time we face Brizzle City on Tuesday.

WD’s post match comments were more or less what I would expect (first hour was the important one, getting everything he wanted out of the game etc etc).

We’ve yet to see his philosophy towards these fixtures, but he wanted last night to be a “good competitive training session”.

And I think the amount of PSFs we’re playing this time (nine, isn’t it?) in comparison to previous years is telling – certainly in the last couple of seasons, it never felt like we did enough of them.

Sure, there are things to work on, although I don’t think last night rang too many alarm bells.

Where there are issues with fitness, potency etc, we’ll have Tuesday to move on a bit further, then the two games in Germany. There’s two dead-rubber types before the final one against Palace, but we’re also playing Plymouth in La Manga too.

Add that to the two we’ve already played, and by the time Rotherham comes around, the players can’t say they’re underprepared.

We didn’t see our new signing Luke O’Neill, who will be an excellent addition by all accounts. The rumour mill was suggesting both Steve Seddon and Michael Folivi were in the stands, so maybe there’s two (re)additions to come.

To be honest, I’m never sure about loanees returning a second time, as they never seem to reproduce it when they return. Should one (or both) be wearing our shirt again next season, you would hope they prove exceptions.

Then again, at MTM Walter was very praising of both of them, and if he’s got a chance to get them again, he’s not going to turn them down.

As for Brentford, a side who I think I’ll be watching more than AFCW next season, they’re a decent side and I like Thomas Frank – a fact I’m sure helps him sleep better at night.

Their second goalscorer (Christian Norgaard) cost £2.8million, and Ollie Watkins is a semi-regular starter at Griffin Park whenever I’ve been covering games there.

And that really is all you need to know, I guess. The smart eyed would have known the game was broadcast live on YouTube via Brentford themselves, although Friday evening is a weird one for pre-seasons.

That said, as somebody put it last night, at least it doesn’t muck up your Saturday.

While things are moving on the pitch, sadly some old issues remain off it. I’m referring to the replacement of seats in the main stand.

The actual seat removal and replacement isn’t the issue – that’s been needed for a good while – but it’s the way those who sponsored some of those very seats have been treated over this.

There’s a number of people who did so for relatives/friends who have died, as a kind of memorial to them, so you can imagine how they feel right now.

At the very least, they should have been informed beforehand that their plaques were about to be ripped out and unlikely to be recoverable.

Not to see something with sentimental value literally tossed aside in a skip.

At “best”, it’s just the usual poor comms within this club. They must have known when Chelski were coming along with the bolt cutters, yet obviously nobody had the wit to co-ordinate something.

Even the “didn’t get round to this” comment on the OS whiffs of amateurism, although the individual who wrote those very words has put their hand up already. Though one suspects the damage has already been done.

But then, comms has only ever been an afterthought. And really, until there’s a big cultural change within the club itself, it’s not going to get much better.

The inability to inform supporters – you know, the very people who are told they own the club, especially when they’re being sought for money – has long been a problem.

It’s not just OS updates, or even things like this, but when you hear stories that families of mascots have to keep phoning up the club for confirmation a week before the game, that’s not unfortunate.

At worst though, it’s just callous. But then, AFCW has long had a bit of an undercurrent of that. Remember the push, not so long ago, to get fans to put the club in people’s wills?

I had visions of a Womble-supporting family in a hospital, solemnly sharing the last few minutes of life of a beloved family member. Then a DTB member barging in and shoving a piece of paper in their dying face.

Thankfully, they quietly dropped that idea, but this kind of attitude isn’t new unfortunately. It’s what gave us 80%Gate after all.

The very least AFCW could do to those who bought plaques etc is a formal apology. Not a general one on the OS, but actually addressed to them personally, in snail mail form.

It won’t change what’s happened, but a recognition they’ve handled this awfully will help.

Personally, I think they should go one step further and offer another opportunity to seat-sponsor – and don’t charge a penny for it either.

I fully accept that seats need to be replaced eventually, but there’s a right way and a wrong way to do it, and it’s now more of a surprise when we do the former.

Will that happen? I’m not holding my breath. Hell, I’m half-expecting everyone affected to be given a Seedrs brochure and Direct Debit instructions…