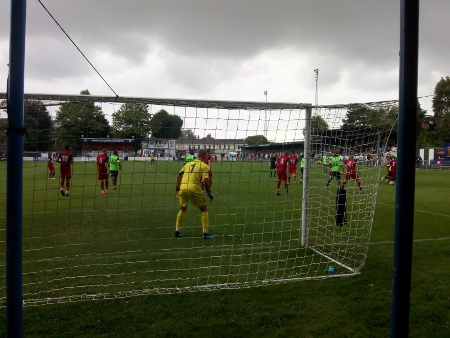 I know it’s been (mostly) upwardly mobile since 2002. We’ve had six promotions, we’re currently in the third tier of English football, and the return home is in a year or so. But never beating Hampton and Richmond has remained one of the biggest bugbears of that time.

Until now, that is.

After Conference South Playoff Losers 1 Conference South Winners 3, you won’t be able to get a sniff of a pint in Wimbledon itself this evening. Celebrations will go long into the night, work days will be lost, and the commemoration DVD is already in production.

Actually, there’s something a bit sad celebrating what turned into a routine pre-season win, against a side who are in the same division the last time we played them**, but I think you could describe this game as a success.

** – while checking where the Axewounds are playing next season, I note that while we play Rotherham they’re at Chelmsford. The difference a decade makes.

Like the Met Police game, we were more or less going at 60% maximum. There were more than a couple of occasions where if it was this time next week, we would have put the boot in much more.

But it was, ahem, hard fought on occasions, and there wasn’t the sirens wailing from an awful performance this close to the actual campaign.

Instead, we started well, putting in “two of the best corners we’ve done in the last five years” (not my comment), and indeed netting with one. Step forward Will Nightingale.

So, you can imagine the all-round raising of eyebrows when they equalised. One feature of the PSFs is that there’s been too many times our back line has looked dozy.

I can understand that against Brentford/Brizzle City/AFCB, but when it’s happened against Plymouth as well as almost doing likewise against the Met Police – well, perhaps maybe it’s not our forward line that we should be focusing on?

To be fair, they didn’t get much of a sniff afterwards, although one suspects our lot had a rocket up the arse at half time.

And we are a League One side. Alright, there was a little bit of uselessness from their keeper – on loan from Franchise – for their second goal, although I think it was a case of when, not if we’d take the lead again.

As for the third….. well, I hope this is just the first from LO’N and his set piece specialism. He was known for it at Gills, and more of the same with us will go down well.

And that’s really about it. It was comfortable enough, I think if we needed to we could have gone up a couple of gears,  we would have done.

What we’re also starting to see is an idea of how we’re going to play. There’s definitely more movement about than last season, and as said above I think we’re going to put our foot in a bit more when the proper games start.

The new lad, Callum Reilly, looked decent. We all know about Piggy, although I think Folivi will be his starting partner. Wood played OK, but he’s more likely to be off the bench.

Oh, and we created history in the AFCW era today. The season can already be claimed as a success…

Plus points: We won. Finally beating the Axewounds. Looking stronger. LO’N and his free kick.

Minus points: Letting them score.

The referee’s a…: Even he’s allowed a pre-season.

Them: Ten years of seething fury after the Conference South days and…

OK, they were up for it a bit, and there were a couple of late challenges, but I think today was just as much a trip down Memory Lane for us.

I dug out the SW19 report from that day, bad paragraph spacing and all, and coupled that with walking around their venue – it really was a step back in time. Even the fence panel that broke is still there, apparently.

Things are different now, of course. They seemed quite friendly towards us (I believe the people behind them in 2009, who seemed to cause the antagonism, are long gone), even if their wannabe Ultras were still thinking Franchise songs still get a reaction.

I do wonder with them what would have happened if they’d gone up with us, instead of them losing to Handy in the playoff final.

They probably would have gone straight back down. But if nothing else – them hosting us, Luton, Mansfield and Oxford that season at the Beaverdome could have been, urm, interesting.

Back to 2019, and to be fair they didn’t rip us off. £10 to get in (although other PSFs there were £8…) and a quid for the car park wasn’t bad. Ditto the £1 for a cup of tea at the fantastically named “Junior Beavers Tuck Shop”…

Point to ponder: So why have we done pre-season this way?

We’ve had tours of Germany and training camps at La Manga. We’ve had two fixtures this week against non-leaguers, and the PSF campaign still hasn’t finished yet.

With the (dis)honourable exception of the Pilgrims, none have been L2 or Conference level either.

It’s a different approach, and the results have been a bit shit at times, but somebody said to your editor on Tuesday why we may have done it this way – we look a lot fitter than we have done in previous pre-season campaigns.

And with that, a lower chance of injuries.

Plus of course, because we’ll have played ten instead of the six in recent years. While there’s some concerns still, mainly with squad depth, we don’t look nearly as half-baked as we have done in 2018 or 2017.

We haven’t played what I would call our starting XI, although today was close to it, but then we might not need to.

Most of the players in the run-in last season are still with us, and we more or less know who they play best with. We’ve signed six with Reilly yesterday, got rid of however many, but the nucleus is still there.

Will it work? We’ll find out seven days from today…

Truth is stranger than fiction: 1) It really was ten years ago when this was a very highly anticipated league fixture. As it was a decade ago when KM saw the lockout against Chelmsford. 2) Yes, the season does start next week. 3) Walter’s trousers. A mixture of golf course etiquette, some old curtains and Rupert The Bear.

Anything else? Just a couple of brief thoughts about NPL.

I note the piling has finally started, and if there isn’t a second one on site already there soon will be. I guess that will take a couple of months for all the foundations to be set in, but the construction you don’t see often takes a large percentage of the whole project.

A letter of intent is something reasonably common, especially if a project has been delayed long enough anyway.

There’s more big Seedrs billboards around SW19, around the old SavaCentre and also a big one near the Polka Theatre. So the push is on, and one assumes the crunch time (to actually get people parting with money) is near.

There’s been some mutterings about what is being offered, though I can’t find any links. So take what I’m saying here with a large dose of sodium, as I don’t properly know myself.

It appears that you can get a plaque for £100, though presumably you have to pay an extra £1000 for the club to tell you when they’ve tossed it in a skip**

** – no, there’s been no official comment on SeatGate as far as I’m aware. Anyone affected should still push for at least a formal apology.

Again, not verified as of yet, but for £100k you can become a Vice President. Which might be more significant than you think.

Firstly, I guess anyone who is one gets their own facilities at NPL. Their own lounge, or some other exclusive perk away from the hoi polloi.

But even if not, that’s still a potential powerful group of some pretty rich individuals. And while officially it’s all Dons Trust memberships having equal say etc etc – a VP Club would have a lot of clout.

Not formally, but influence.

Think of how the current Yellow and Blue Club gets dinners with Walter etc. And I bet they have more (unofficial) access to the club’s decision makers than the ordinary DT membership holding pleb.

We’ll see how that particular arrangement pans out, if it comes to pass, and I bet it might end up ruffling a few feathers.

As for a couple of other supposed fundraisers, like £30k to play golf with Walter – I hope that’s some golf day thing at a very exclusive course, because even playing at Wentworth is a fraction of that…

In a nutshell: Beaver bashing is fun.