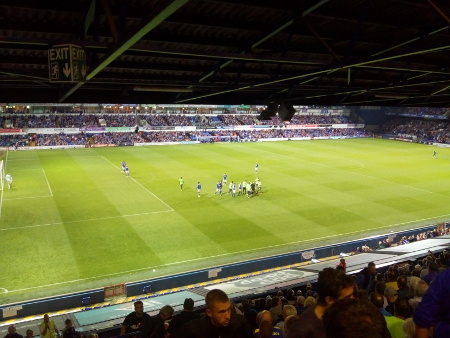 Another game, another fantastic ability to shoot ourselves in the foot and turn a very possible three points into a very real zero.

And this time, it’s a sickener.

I’m fully aware that many if not most of us were expecting a gubbing before Ed Sheeran 2 Marcus Mumford 1, so as bizarre as this is going to sound – we may be heading in the right direction.

It still doesn’t make it any less painful today. For eighty minutes, we fully deserved to be in front – we battled, harried them, and to quote an Ipswich supporting journo on Twatter at half time, we were schooling them.

NGW’s goal was superb, although you won’t be surprised to hear that our forward line was as ineffective as ever. Last night, it was Folivi (who to be fair was good and energetic), and Appiah, who I’d forgotten was on the field until he got subbed.

We always need that second goal though, and had we got it we’d be glowing this morning. We didn’t, and the longer the game went on the slower the clock seemed to get.

Whether it was really a corner or not for their equaliser, it doesn’t matter. They get a set piece, and you defend it – simple as. Well, as simple as their header turned out to be, anyway.

Walter’s got some more grief over his subs for the second time in four days. And it’s true that Pinnock didn’t impress one bit, nor did Piggy up top on his own. It was the wrong time to put on Connolly or the lesser-spotted Roscrow.

His honeymoon is definitely over.

But I think what undid us (again) last night was late-game fatigue – both mentally and physically.

You could see after it was 1-1 that they were getting stronger and we weren’t. We sure as hell weren’t going to get a second, so the next best thing you do is to stand firm and repel just about everything.

Which worked. Until the 95th minute…

Or was it 96? Who cares? All I’ll say is that McDonald should be having nightmares for the rest of the week about that “clearance”, because if he’d just connected to it we would have that point.

When it went in, I’m not sure what was more sickening : losing in the last minute, or losing knowing we’d played damn well but still got nothing.

With scenes at Portman Road not seen since they won the UEFA Cup, it’s another hammerblow for the confidence, isn’t it?

The players looked on the floor, and they’ve got to lift themselves for another potential bowel-breaker in Mackemland this weekend.

And if we score a goal in the 90th minute to go 1-0 up ourselves, everyone will just think it will be 2-1 to Sunderland after 94 minutes.

So, what’s the damage? As deflating as this month has been, there’s still enough there to give you some hope.

This was your editor’s second game of the season, and we played as well for all bar fifteen minutes last night as we did in the second half against Rotherham (and I believe for periods of all the other games).

Trott looks an upgrade on Tzanev, even if he does look a bit like a human drainpipe. And he certainly felt the odd boot or two.

NGW has come from non-league but doesn’t look out of place for the most part. At times there was some definite cohesion in our play, and an idea of what to do with the ball.

We still have Nightingale and Wordsworth to come back, and while they won’t be the silver bullets their character will make the difference more often than not.

And if – if – our biggest problem is playing for the full 90+ minutes and just having the right physical/mental conditioning to see it out – we’ll be OK this season.

We won’t be much good, all the while we don’t do anything about either our strike force or midfield. But we’re competing in games, and losing leads is (sort-of) better than going behind and waving the white flag when you do.

Plus points: The first eighty minutes. NGW’s goal. Our support.

The referee’s a…: It doesn’t help when one of our players gets clattered in injury time and the official simply ignores it.

Them: Got away with it, and they knew it.

For a team that many expect will only spend one season in L1, they weren’t all that for the most part. It’s no surprise they scraped a draw at Peterborough.

It’s also not much fun this morning for your editor, because one of my mum’s relatives is an ITFC season ticket holder**

** – also weirdly enough, your editor went to school in Merton but growing up in the 1980s I knew not one but two Ipswich supporters.

It’s a surprise that they’re in this division, because it felt like going to Barnsley/Sheffield United. Even down to the sense of feeling outnumbered even walking around the town centre two hours beforehand.

I guess they’ll go up, because their win last night is the sort of contest that kickstarts a campaign. Though it sounds like they too are after a target man.

One other thing – I’ve always liked the Ipswich badge because of that horse controlling a football motif. Quite nifty footwork (or hoofwork) by it, and shows a technique that none of our current midfielders have.

Maybe we could try and sign it on loan for this season? Even if our budget won’t allow us to buy more than a bale of hay a year.

Point to ponder: Could this game be the final kick in the knackers too many?

As deflating as last night ended up being, there’s also an undercurrent of deep irritation. This game should have been a point at the very least, but it wasn’t even that.

Couple that with it happening in every game this season bar the first one (including Franchise) and one wonders when the frustration finally boils over.

Wycombe could be a watershed moment for that, because the collective patience has been sorely tested enough in the last couple of seasons.

The most pressing question right now is how we deal with it. Being able to play for the whole game instead of most of it isn’t insurmountable at all, but there’s a real danger it can drain the confidence.

Do it too many more times and we end up going onto the pitch practically being scared of taking the lead because of what happens afterwards.

As said earlier, the return of Nightingale and Wordsworth will help, but it’s up to the other players to respond to them.

The journey up to Wearside will be a long one, and will be an even longer one coming back if we lather, rinse and repeat again. But that will be plenty of time for everyone – players and management alike – to start thinking.

Ipswich have probably got their season kickstarted last night. We need to do the same ourselves, and quick…

Truth is stranger than fiction: 1) Decent turnout for us, considering it was an evening game at £27. Regardless of entry fee I bet if it had been Saturday it would have been a four-figure turnout. 2) The Kalambayi song to Backstreet Boys’ “Everybody (Backstreet’s Back)”. Original, funny and hopefully one that gets a lot of airing. Though a bit disturbing grown men knowing a BB song.

Anything else? This question got posed while focusing on the goalkeeper situation, but it’s worth widening the scope.

After the game in Mackemland, we have a week to make a decision on what to do in the transfer window. And it may be a very important one to have.

I know that the transfer cupboard is threadbare, but there’s a definite need for somebody with more experience who can carry us over the line in games like last night.

A target man is preferable, but equally somebody in midfield who can take it by the scruff of the neck.

Walter can be justified in going to the board after Sunderland and say to them that they’ve got to help him out further – and somehow scrape some extra funds together.

He’s made mistakes recently, but his “reward” for the most unlikely of great escapes is to have his spending power further slashed.

Which is why he would also be justified in agitating for just a bit more extra money from somewhere – especially as just one experienced senior pro could make a lot of difference.

It’s not like WD owes the board anything. He doesn’t, especially as it’s an open secret that many of them didn’t want him to begin with. If he feels he’s being undermined by them, he’s the sort to do likewise.

So if the kitty is empty, how do we go about getting extra funds? Moving some of our bed-blockers has proven impossible – something to do with “contracts” – so the usual benefactors might be getting a couple of phone calls again.

Yeah, Seedrs and all that.

I don’t doubt there’s some politicking going on behind the scenes, especially when you’ve got a manager who’s put together a large database of players but is only allowed to look at the list on a computer screen.

And if that approach doesn’t work, perhaps Walter should just publicly whine and bitch about the budget every twenty seconds? It worked for our previous manager…