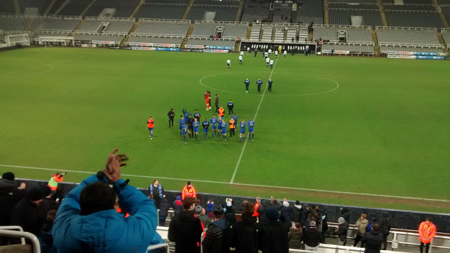 AKA one of the most surreal away trips I’ve ever done.

Doing an FA Yoof Cup game at home is one thing. Going to an away one is slightly more unusual, although if it’s local it’s understandable.

So going up to Toonside on a Wednesday evening is something else entirely. What it is I don’t know, but it probably features the words “bastard” and “sad”.

But after Wednesday night, it all seemed rather worth it.

The game itself was one of those ones where we got what we deserved, and it would have been about 5-2 if we could finish a bit better.

We looked physically smaller than the Newk yoof, although I think some of them were on the limit of the age range. Either that or they feed them on stottie cakes and saveloy dips.

But the skill level was certainly there, and perhaps more important the attitude was as well. When we let in a goal soon after the restart, you did genuinely feel that was going to be that.

However, we composed ourselves, got back to doing the basics, and the late winner felt as good as anything the first team has cooked up for a while.

Quite a few things became apparent this week. There’s a definite bond between all the players – those in the squad but not playing were in front of me during the game.

You can see them in the crappy photo I took above, they’re down the front. TBH you could forgive yourself for thinking they were supporters, the way they went apeshit after the whistle.

There’s also an underlying sense that they could be on the brink of something quite special. We have gone to Vicarage Road and now St James Park and won, neither of which were flukes.

The letters to fans on the supporters coach was a nice touch. And it didn’t even manage to feel forced or corny either.

But if you were to take one moment from the whole trip, it was us apparently asking NUFC for a broom afterwards to help clean the dressing room.

If that isn’t a reminder that you’re a youth player, nothing is.

But it does sound like they’re being given a work ethic that will push them quite far. That was apparent during the game, nobody seemed to slack off, and unlike the opposition we didn’t start going down with cramp an hour in…

Actually, Newcastle United itself seems in quite bad shape. Even SJP itself looks a little bit ragged around the edges if you get to look closely at it.

The first team is in the bottom three of the Prem for good reason, although in my lifetime they’ve always been underachievers**, but I was quite surprised how ordinary their dummy suckers were too.

** – or if you prefer, NUFC are the West Ham of the North. Another club that has a “mystique” that hides that their last run of success was about 50 years ago, and have been mostly shite since then.

They should be better than ours, but they weren’t. And perhaps that’s down to hunger – they’re probably on decent money for 18 year olds, especially up in the North East, and with some of them they probably think they’ve made it already.

Apparently, some of them have agents. You can bet that they can sweet-talk them – or more accurately, their parents – into going into a Premier League club where they’ll probably get tossed onto the scrapheap.

But then, it’s easy to blame Prem managers for buying from abroad and not giving their yoof a chance. With the possible exception of their #11, whoever he was, none of them look anywhere near getting their first team.

The video of Peter Beardsley coming into our dressing room afterwards has done the rounds and then some, and he was always a class act.

Back to our youth, and there’s quite a few “they may lead us out at NPL” comments about. As romantic a notion as that sounds, sadly yoof development doesn’t usually end up with such a happy ending.

Many if not most of our young heroes on Wednesday won’t make the first team. That may also apply to the XI that starts the LSC tomorrow at KM.

That’s the way it goes, although you definitely hope a couple of them stay the course. Look at how popular Will Nightingale is, and how his constant injury issues don’t seem to just hurt him.

The yoof setup has definitely improved in the last 2/3 years, now that we’ve got people in who have a good idea what they’re doing. Not to mention the gap between the first XI and the rest is finally closing.

Players like Nightingale and Beere have played for the first team despite what it has been, not because of it. It wasn’t that long ago that we didn’t even play u21-development fixtures.

Those who make the sodding awful journey to watch games at Merstham seem to speak highly of Alan Reeves’ men, and tomorrow we can hopefully justify our favourites tag.

Whatever happens, the fact we’ve got an increasingly good yoof setup pleases people a lot. It’s obviously a throwback to the WFC era, even if it was slightly mythical about how many players we produced.

That was done out of necessity, as is the case today in the AFCW era too. One other stat that was bandied about after Wednesday was that 80% of our squad was scouted from Sunday League football.

Whether that’s entirely the case, both in percentage terms and what sort of level they actually came from, it’s still a good story. Even if it’s just 30%, it does show what good scouting, hard work and intelligent coaching can do.

Anyway, the next round is us at home to either Yernited or Chelski. If it clashes with a first team fixture, then they’ll have to move it to a Friday night, although I’m sure NA will understand the first team getting Saturday off.

Oh, and to repeat an observation made on Wednesday evening – if it is Chelski in the next round, at least their u18s will be getting used to their new venue…