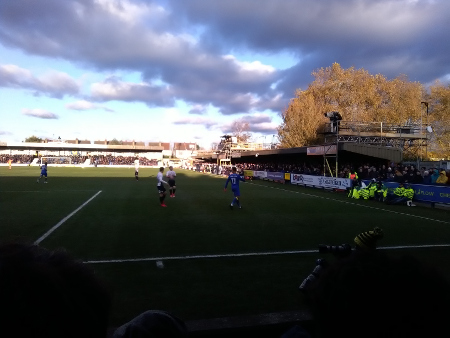 At least we didn’t ruin the Sunday roast for the millions (?) watching on TV.

I suppose we can’t really complain too much about Oiks 2 Posh 2 in the end. It was a game that could have gone wrong, but didn’t, and we didn’t shit the bed for the Sky cameras.

And I think we learned a few things today.

The most important one is the lesson that has failed to be heeded for so long, and not just this game – anyone who has wanted us to attack from the off, with two men up front and others playing the right position can feel a bit justified right now.

Taylor’s goal after 36 (or was it 37?) seconds was the dream start that I didn’t think we had within us. OK, it did feel we tried to win the game 1-0 by defending for about 89 minutes, and we all know what happened.

But there was something a bit refreshingly old skool about our second effort that went in – a long punt, Cody McDonald getting hold of it, and he finally – finally – found the net. He needed that, and so did we.

After that, it did seem a bit flat. Maybe the shock of two goals in one game poleaxed us? Perhaps we used up the maximum amount of time per month that we’re allowed to have efforts on target?

But it proved that the negative, safety first, let’s-hold-it-goaless-until-there-is-ten-minutes-left-oh-shit-we-have-conceded approach doesn’t work. It will never work, and quite simply it doesn’t deserve to work either.

Have a go, like we did today, and you may let goals in, but you stand a good chance of adding to the scoresheet yourself. It’s more successful than going for the 0-0, or 0-1, and is much nicer to watch, too.

I can also see why Jimmy Soares-Trotter (three human bodies but the player is one) is as popular as a fart in a lift. Actually, while Soares can have moments of semi-decency, Trotter seemed to get mentioned a lot today.

Much in the same way as Jozef Fritzl gets mentioned in discussions about good parenting, in case you’re wondering why.

While there might be a protection issue about Hartigan, at the same time shoving him on the bench doesn’t do anyone any good – especially as he’s been the most creative midfielder we’ve had this campaign.

We are in a relegation battle, but players like our youngster won’t make things any worse. Other factors may damage his career, but playing in games won’t be one of them.

Thankfully, McDonald and Taylor are finally being allowed to play alongside each other (I was going to write “with each other” but that would be taking the team bonding thing too far). Again, it shows, and almost got us a much needed win.

It’s by far and away the best (OK, only) tactic to use all the while Appiah’s crocked, especially as Taylor isn’t put out on the wing like he’s been ostracised.

Put Forrester in the right position too, and it’s no surprise that this was the best result/performance since Rotherham. Though whether he’ll be here after January remains to be seen.

Time will tell if we actually learn what worked today, and figure out that it’s not a bad approach to have. It would be nice, especially as you can look at today, to point out things that could be tweaked without getting worried/annoyed with the fundamentals being wrong.

Of course, the two best games recently have been today and Rotherham. Which were the last two your editor have been to. I’ll graciously accept all the plaudits…

Plus points: We didn’t lose. Having a fucking shot on goal. Taylor. McDonald. Coming back after being 2-1 down. Having more of an all-round clue.

Minus points: We didn’t win. Going back into our shell after going ahead. Our midfield. Still some obvious weaknesses.

The referee’s a…: Got more than a few cheers when he awarded us a free kick, which might explain the general viewpoint of his all-round performance. On the plus side, at least he didn’t fall for their #11 doing his own WW1 tribute, by falling down like he’d been hit by a mortar.

Them: Like a lot of teams in L1, they’re not significantly better than us, and if anything their ability to keep out goals is as good as ours.

True, they forced Long to make two saves late on, and maybe they could have felt that they had the better chances overall. But it does prove that there’s isn’t that much between the vast majority of sides in this division, ours included.

As mentioned above, their player was fatally wounded after his little discussion with Trotter, and therefore didn’t deserve the abuse when he rose from the dead and was able to take a corner. We should praise him for losing his life after the clash but was able to carry on.

Decent turnout by them, and their mascot (a giant bunny called “Peter Burrow”) was seen demonstrating beforehand other uses for a large carrot. In other news, Haydon the Womble has a rather unusual grin on his face.

Point to ponder: Can we give the whole whinging about the Lowest Budget In The World Ever™ a rest, please? Especially as most of our problems this season are nothing to do with it.

I don’t listen to NA’s post-game interviews any more, but apparently he was going on about it again, and it seems like it’s going to be the standard party line from now until about Domesday.

Today proved that we’ve struggled because we’ve played the wrong tactics with the players we’ve got. We have also had the wrong approach in trying not to lose rather than go out and win.

That’s nothing to do with money and everything to do with attitude. True, we’re not as rich as other clubs, so you have to cut your cloth accordingly and find something that works according to what you can afford.

You have to be much better with your scouting and recruitment, because you (literally) can’t afford to make mistakes. You have to use the loan system well, your yoof system too, but it’s more than achievable if you know what you’re doing, and don’t have an obsession with being a Poundland Barcelona.

A certain club called “Wimbledon” was very good at dealing with a tight budget. That was Wimbledon FC by the way, an entity that in some ways had much less spending power back in the 1980s than AFCW has today.

This club plays the victim card a bit too often as it is, which gets quite irritating to listen to, and the bleating just comes across as excusing failure – it’s as if there’s absolutely nothing we can do to improve things without spending lots more money.

It’s very un-Wimbledon, and back in the day we used to laugh at other clubs who complained how broke they were.

I suspect the real reason for it is that we don’t have the resources to sign the type of players who can play negative football for most of the game before nicking a goal. Therefore, our alternative is what we did today instead, and maybe let a few goals in return. But I’m sure I can put up with that…

Truth is stranger than fiction: 1) No poppies on the shirts, although we wore armbands instead. Given all this poppy fascism stuff about, I’m glad we were a bit more circumspect. 2) 4220 there, at least officially. Were a few empty spaces around me, though that’s probably nothing to do with non-attendance. 3) If you’re wondering why our game was today on Sky, the last couple of fixtures they’ve shown were at Pompey and Gillingham. In other words, look at a map…

Anything else? I think the club does need to issue something about NPL, because the whole s106 thing has gone on for a long time and people are asking questions about it now.

Even if it’s just a straightforward “the lawyers are looking at the wording”, then at least it will be something. Because it’s gone awfully quiet, perhaps too quiet, and I would state it’s more important to us than even staying in L1 this season.

True, AFCW got bitten this time last year over making predictions, and it’s going to be cautious, but it’s now gone too far the other way.

Supporters – all supporters – are entitled to know the current state of play, because we’re the ones who will be expected to help drum up interest to fill seats. People give a lot to the club, and it’s not a one-way street.

I’ve seen odd snippets of Galliard’s advertising for the new site, and you could be forgiven for thinking there won’t be a new stadium next to it. Your editor (and no doubt some of you) keep getting asked what is happening, and like fuck I know anything myself.

Are there problems? Is it “imminent”, as that dumb LBM councillor stated a couple of months ago? Has the project been scrapped and the club is just waiting for the most opportune moment to tell everyone?

OK, I’m joking with the last one. I think I am anyway, and I don’t blame anyone for thinking that it’s not going to happen after all.

After all, the club’s comms isn’t the best, AFCW can be secretive when it doesn’t need to be. We won’t get a running commentary about the s106 progression, but even a simple “we understand the frustration but it is coming along. Honest” type message would get appreciated.

And who knows, it may even happen before December. In 2018…

In a nutshell: Better than watching Highway with Harry Secombe.