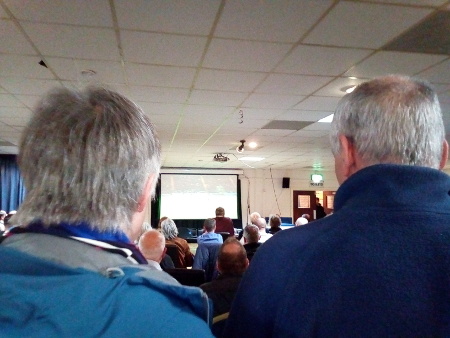 If the two in the photo are reading this, don’t worry – I moved on soon afterwards…

So, the heart-to-heart and the phone calls went well then. Wombley Losers 4 Wombley Winners 2, and the only saving grace is that I didn’t have too far to travel back.

Some this morning may be pointing that the ball did not cross the line when we could have made it 3-3. Yes, it could have changed things, and yes – when you’re down the bottom, luck always goes against you.

But I’m not sure we would have deserved it. And I do think that Plymouth might have put their foot on the gas again.

Last night was AFCW in a 90-minute microcosm. A bit more effort when needed, moments when we don’t look so bad – but far too much dross which cancels all of that out.

Not to mention some top quality gun-to-foot moments as well. You can look at the Plymouth goals yourself, but Taylor’s penalty was equal to the one against Franchise. Again, if there was just one goal in it…

There’s no getting away from it – we’re in trouble. There were times where I thought we were not only shite, but playing within ourselves as well. For all the bravado, that’s not a good sign at all.

As for the huddles…… by all means do one before the game, but to do one when we go a goal behind? That’s trying too hard. Mind you, we weren’t so keen to do it after conceding again.

The game itself would have been quite entertaining for the neutral, especially if we had got close again. I don’t doubt that we went out with a point to prove, but all we produced were little spells.

And little spells won’t get us enough points.

For the third straight game, we pull it back to 1-1 and we let it slip. Last night, we couldn’t even hold onto that for more than a couple of minutes. That is a weak mentality, almost a fear factor coming into play.

Of course, what really killed us was going 3-1 down just before the break. When you do that, you don’t deserve to get anything. And you shouldn’t even get a sniff from there on.

More on the beamback itself later. For now…

Plus points: Franchise lost. One or two moments of promise.

Minus points: Most of the rest of it.

The referee’s a…: Should he/his lino have awarded our goal? Then again, the same people didn’t give Plymouth two disallowed efforts either.

Them: It wasn’t that long ago that they were below us in the table, and as likely to return to L2 as quickly as they came up.

Almost let us back in, because like most clubs in this division they’re not all that when you have a go at them. Hell, we even hit the post in the first 5-10 minutes. But as said above, one suspects they would have just gone back up a gear.

Seemed a lot of people there, presumably because it was half term, and Plymouth has always been a club that should be bigger and higher up than it actually is. One only has to see their support in London/SE to realise that.

Point to ponder: So now what?

We’ve had the post-Northampton discussions. We’ve had the phone calls, the training ground meetings, and doubtless other things us fans don’t know about. The transfer window is shut, although we did little in it anyway.

Everything we seem to do either doesn’t work, or it doesn’t last long enough to make a proper difference.

True, we played better than we did against Bury (although it couldn’t have been much worse), but nothing really was different from various points earlier in the season. And to paraphrase elsewhere this morning, are we that ignorant of our own failings?

This might be the case at games I don’t go to, and perhaps true at Home Park last night, but people at KM sensed there is a fundamental failure in the way we do things, that has put us in the bottom four.

Most talk of radical change is academic right now, it’s more likely in the summer. But our fans aren’t stupid…

Truth is stranger than fiction: 1) Decent turnout, both at Home Park and at KM. 2) Speaking of our current home, your editor realising how more laborious getting there on public transport is than a car.

Anything else? Yep, this was my first beamback, and while I’d rather have been in Devon last night, it was an acceptable substitute.

It’s undeniably surreal to watch a game in that manner, even down to little things like nobody clapping when the teams came out. Not to mention the sarcastic little cheer at the end when it got turned off.

The feed isn’t bad, broadcast-quality even if it certainly isn’t HD. A bit like a good internet stream on a Russian channel (so I’m told, officer).

A few things that stuck out though. As a concept, it’s an excellent one, and it’s for people to watch the match who otherwise wouldn’t have gone. I don’t think it shaved too much off the travelling support, anyway.

It did feel in parts a bit “distant”, as though you were a viewer rather than a supporter. But it does work, the amount of people using the hospitality proves that.

I’ve no idea how much that was, but £5 for us plebs is the right price (I assume it covers the cost of transmission). It’s the price of one pint after all. We shouldn’t charge any more for it though.

Nor should we do it for anything other than long evening games away or Frenzydome fixtures. To be fair to AFCW, it doesn’t do that, and I think it would start pissing off other clubs if we start chipping away at their revenue.

It also reminded your editor that KM isn’t particularly nice. Even the main bar… sorry, the Your Golf Travel Bar** after it’s been spruced up feels one step above a WMC, minus the tin ashtrays.

** – since when did that happen? I don’t think I’ve ever seen a *bar* sponsored before.

Watching it in nicer environs at the new gaff will be a much more convivial affair, and I do know that the KM facilities put a couple of people off who would otherwise be there.

That’s why I don’t think the new COO will get too far in trying to use what we currently have. For example, we could do with a bigger screen in the main bar, but there’s no point in paying out that money for it now.

People aren’t going to hang around afterwards for evening games anyway, especially after a loss (it was practically deserted a couple of minutes after the final whistle). So it’s also not quite the social event it may be.

But it’s a service, a convenient one at that, and it didn’t even matter that there wasn’t any commentary. But I have to admit, I’d still take the option of going to the match every time…

In a nutshell: That sinking feeling.