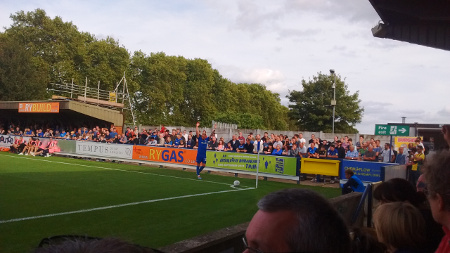 At least we managed to score more than one goal…

Yes, I know we pulled it back to within one goal on two separate occasions, but to be honest I think we got what we deserved out of Plastic 2 Irons 3. Which is, to say, absolutely fuck all bar mass grumbling.

Because when you keep shooting yourselves in the foot like we did, you can’t complain when you can’t walk home afterwards.

At least two cheap goals undid us this afternoon, and apparently Deji was at fault for the third, but it was an all-round wank performance in the first half that practically killed us.

NA was unsurprisingly seriously pissed off after the game, and no AFCW player tonight can really argue with anything he (or any of us) said to them. Although I won’t mention the words “factor” and “constant” just yet.

OK, you can be lousy, still be behind and get something out of the game. That’s football. But I think what’s got me this evening isn’t when we went 2-0 down, it’s when it went to 1-3.

To our credit, we clawed it back after the break, and if we had kept it like that for a little while we might – might – have got something out of this fixture.

But when one of your strikers does his John Gayle impression, and then we let in a soft goal immediately afterwards, that’s what really sticks in the throat right now.

It’s almost like you throw yourself into a big river, just about pull yourself out, then decide you like drowning after all and dive in head-first again once you reach safety.

Not that we should let the first two goals sneak by without comment. Your editor said before the game that King wasn’t too bad a keeper, and that he was only suffering from not being George Long.

No, it probably wasn’t a free kick, but your goalkeeper shouldn’t be wandering about like our shotstopper was. But then, it summed things up.

As did their second goal, where only one player in the whole move seemed to know what year it was. Unfortunately, it was the bloke who scored it…

To be fair to us, maybe out of shame more than anything else, we did at least have a go back. And yes, to make it 2-3 when you’ve been responsible for it being 1-3 in the first place does show a bit of character.

The problem is, you can dig yourself out of trouble once. It’s much harder to do it a second time, and after that burst of old skool energy after Appiah’s header, we finally ran out of steam.

And as said earlier, we didn’t really deserve anything because of the way we ballsed it up beforehand. Not that I would have complained if we equalised…

So, what? It’s another loss at home, and the early season optimism is truly gone now. Our forward line was better than in recent weeks, but now our back line is playing like retards fucking a doorknob.

Pinnock once again didn’t start, although Hanson was injured. Our crosses – once we started putting them in – caused problems, and on another day who knows what would have happened?

But like Burton, and like Walsall, even though we are better this time around, the ghosts from last season haven’t fully died off…

Plus points: We scored twice. The battering ram resurfacing for a time. Appiah growing in confidence after his goal.

Minus points: We lost. Very poor goals to concede. Defence. Too much foot shooting. Starting to ship a lot of goals in games.

The referee’s a…: It really doesn’t help when you have an official who only spotted a handball when Pinnock (?) tried to keep the ball in near the end. One thing this season has become clear – if an AFCW player gets assassinated on the pitch, the official will still manage to miss it.

Them: Three efforts, three goals, and really that’s all they needed.

It proves the difference when our lot have to make about twenty chances to net one, while they’re more clinical and pounce on opposition errors that we simply cannot do.

Even so, they were vulnerable when we got our tails up, like most teams in L1, and it wasn’t really much of a surprise when they started timewasting with fifteen minutes left. They knew how to play the referee, who needless to say was very obliging.

Their player who got KOed didn’t look in good shape, it had to be said, but he was seen later watching the game from the tunnel…

Point to ponder: Why is our home form so shit?

The last time we won at KM was Charlton on April 10th last season. Before that, it was Oxford on 10th March, and Brizzle Rovers on 17th February. Three wins since our purple patch in January.

That might go a little way to explaining why there were only 3800 there today, as if you go to a home game you probably won’t see us win. Couple that with the lousy views even away from the RyPiss, and there’s a definite reason for a relatively low turnout.

This is a good time to mention that as you can tell, this was my first Saturday 3pm game since 25 March 2017. I’ve been to KM games since then, obviously, but even back then (where we lost to Southend) there was something about home fixtures where we regularly under perform.

Do the players themselves hate playing at what is a pokey non-league venue? Perhaps, but they’ve got to adapt to that for at least one more calendar year. And a very tight little ground should be working in our favour, not against it.

One thing that struck me about today was how quiet KM was. OK, the shite on the pitch went a long way to that, but even at 2-3 the atmosphere tailed off after a bit of life. That can’t help on-field matters either.

Whatever the reason is, and however you change it, it’s hindering us. We shouldn’t be fighting relegation at all this season, but because of games like today, that’s what we’ll be doing.

Truth is stranger than fiction: 1) The Turnstile Bar, which is literally a tiny counter serving beer. I’m sure the last time there something like that in a football ground was in 1972. 2) My ST card eventually working upon entry. Good job I went in at 14h30 without anyone behind me. 3) Anyone else’s phone internet gone down today? It happened at the last KM game I was at too, and I’m sure it’s not just me. Worse still, it happened in the first half, so I had to watch the game.

Anything else? I don’t know if the programme mentioned anything further, but an interesting NPL update on the OS none the less.

I think more has been said than on there, but it’s clear we’ve literally got into the nuts-and-bolts stage of things. Which is probably why we’ve changed our main contractor (TBA).

We probably didn’t want to do this at this relatively late stage, but the actual construction hasn’t started yet, and you don’t want to deal with anyone who isn’t going to be 100% helpful and charges you a lot in the process.

The financial pressures from NPL are going to be a shock to some of our fans as it is, and there’s no mileage in completely putting yourself out of pocket when there’s a viable alternative.

Despite the sight of the blue roofed stand and various piles of rubble still visible to anyone passing the site, apparently the clearance is almost now complete, and it’s just redirecting the existing culvert (ie where the water drains from under the ground) that remains.

It does seem like the club is starting to hedge its bets about when to move in. If it’s true that building isn’t going to commence until January/February, then moving mid-season simply won’t happen.

August 2020 would be earmarked instead, which from a logistical standpoint would be better but does mean we’ll be stuck at KM for a further full season. And one suspects the club would want to be gone as quickly as anyone else does.

We may have to be out of KM by the start of the 2020/21 season anyway, which is something wasn’t mentioned in the OS update but was the takeaway from Thursday’s SGM. Which would be quite startling to many if it’s properly true.

I guess it will turn out to be irrelevant, because we’ll either be in NPL by then or as close to it. Start building in Jan/Feb and we get a six month buffer for the inevitable delays.

And if we end up having to groundshare after all, would that really be a bad thing? Christ, after the comments about the KM experience above, we should consider it from the next home game onwards…

In a nutshell: Piss off.