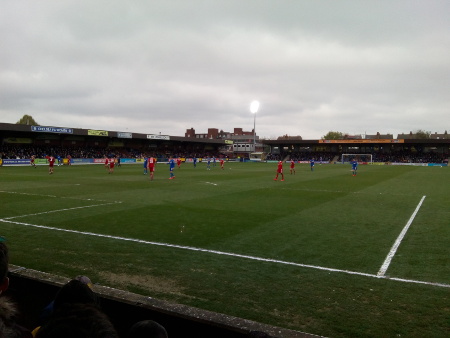 AFC Wimbledon. Where doing things easily is not an option.

If truth be told, I’m not quite sure how to approach Southern Softies 1 Northern Bastards 1. I suppose the best way of describing it is that it should have been better – but could have been a lot, lot worse.

It’s a point, we’re still in the relegation places on goal difference, and nothing has changed that much from this morning. We still need to win games, and that’s what we failed to do today.

Not for the first time this season, we were our own worst enemy. We went ahead, a good finish by Piggy, we let them back into it, and then for the third straight game in a row we gifted the opposition a goal.

And a load of “what if” moments followed.

What if Kalambayi just hoofed the ball clear instead? What if Hanson’s run and lob in the second half had just gone a few inches to the right? What if the goalmouth scrambles we had just fell to us?

On the flip side – what if they’d scored that penalty?

Let’s face it, we don’t know whether we’ll stay up or go down right now. Granted, I would have snapped your arm off for that even as recently as January, and there’s at least one twist still to come.

But it’s not going to make this final few weeks any easier to get through. Already, Oxford this time next week becomes another vital one, and seven days is a long time to be looking towards the next game.

And I’ve already looked at the fixtures for next Saturday. I hate myself.

Your editor has felt for a long time that our fate will be sealed around Easter, although I think that we’ll end up needing something at Bradford instead.

I’m not going to get into all the permutations, because our mantra remains simple – just keep getting the points on the board and the rest will probably sort itself out.

The reaction of the players afterwards was telling, by the way. It was as though they knew they missed an excellent opportunity. They’ll still get others, and as said on here some while back – we only need to be out of the drop zone by the time we leave Valley Parade…

Minus points: We didn’t win. Their goal. Seddon’s injury.

The referee’s a…: Booked a lot of players for diving, except for their penalty. While we won’t go down because of the officialdom, I don’t remember referees being this bad…

Them: The tough Northern team we always seem to struggle against, and today wasn’t any exception.

On a bad run themselves, and must be buying drinks for our defence the way we let them back into it. I guess though their player felt guilty about earning the spot kick, considering where he put it.

To be fair to them, I’ve got a lot of time for t’Stanley, because up until Walter came they were showing us exactly how to build a team with a fantastic work ethic and no bellyaching about their budget.

As long as it’s not at our expense, I wouldn’t begrudge them too much for staying up, because they’re probably one of the smallest clubs ever to be in the third tier. Yes, even smaller than we are…

Point to ponder: Whither Kwesi Appiah?

He came on again today, and the only reason I remember his contribution is because he’s even slower than I thought he was previously. At least Hanson has (for now) managed to avoid getting injured for two or three games straight.

I won’t go over old ground with both those two. We all know they’re part of the reason why Wally Downes is now our manager, although Hanson is making a contribution.

With our Championship Quality™ striker, you really get the sense we might as well put on Folivi instead. We couldn’t have done any worse, and I don’t think our loanee has done too much wrong since he’s got here.

Because of that, you do wonder about Appiah’s future next season. Yes, he’s still got a season left, but this might be one of these mutual-consent type parting of the ways.

It doesn’t help hearing stories that he’s blocking our own fans on Twatter, and him going on international duty did seem to stick in the throat a bit. That last bit isn’t his fault, but it gets amplified when a player isn’t exactly a favourite.

Obviously, I hope he gets the goal that keeps us in this division for next season. Ditto Jake Jervis, who seems to be along with Soares in Wally’s woodshed (and I bet you’d forgotten those two were still with us).

But as good as our recent form has been, we still need a summer overhaul. And one suspects that it won’t just be those out of contract that go.

Truth is stranger than fiction: 1) Felt fuller than previous games. And proved that it’s not just the RyPiss that has a god-awful view. 2) Seeing W&G being very animated after we scored. 3) Shooting practice before the game. Various armies will send their combatants to stand behind the goal, so they know how to deal with lethal wayward missiles.

Anything else? There’s something symbolic about the groundworks for NPL getting the green light, because like what we’re seeing on the field – the fundamentals are being changed.

With all that’s been going on with the playing side of things this season, it’s easy to forget about only the most important off-field topic since 28/5. We’re definitely in the home straight now, just one more legal document to sign then one final judicial review stage to get through.

And these are the kind of updates you want to read about – we now know what’s about to be done next, and more importantly how long it will take. Nobody is left guessing when you give that kind of stuff out.

Ten weeks is quite a long time, but then it’s a big site to begin with. And while we wait for the final hurdles to be vaulted over, there’s no point in not doing this kind of thing right now.

What it does mean is that the main building work isn’t going to start until about June. While it’s certainly plausible to get it built within 14 months**, it’s unlikely that we’ll kick off the 2020/21 season there.

** – as we’re not building four sides with “proper” stands, the amount of time it takes is less than, say Brentford’s will be. Besides, the main stand only needs to be done to “practical completion” stage for the first game.

But then, September was always a more realistic timeframe. And it won’t make that much difference if it was.

It’s clear that the big ceremonial works will be in the summer. Most likely June, but it would have been deeply symbolic if it was 28th May…

So, was it worth it? Ask me at the end of the season.

In a nutshell: Two points dropped. Or one gained.