Like quite a few Wombles, I spent a crisp mid-winter’s Sunday in the arse end of SM4 at the somewhat less than advertised “open day” at Imperial Fields, home of Tooting and Mitcham.

Now, a lot has been said about this, and I will add my â‚¬0.02 here as well. I’ll cut to the obvious stuff first – it is a very nice sports stadium, even if it does have the feel of a shell or a yet-to-be-occupied newly built industrial estate. It clearly has been pretty well designed terrace wise, it’s got a lot of space around it. Parking could be fun, the roof at both ends needs to be extended and a bit of wet weather protection wouldn’t go amiss. And of course the much vaunted (hur hur) drainage system needs to be looked at.

So, nothing can go wrong can it? Well, let’s just say that things aren’t as straightforward as they may appear above. It’s difficult to articulately explain this, but, well, how shall I, er, put this? Basically the whole thing doesn’t feel right. My gut feeling doesn’t like this whole scenario one bit.

Actually, I’ll get right to it – the whole thing could be a disaster for AFCW, and I’d never thought saying that a move back to Merton would be wrong would EVER happen. But it has, and I think a lot of people are thinking the same way. What’s bought this all about? Basically, there are three major bones of contention : (1) It’s somebody else’s ground. (2) It’s owned by Ron Noades. (3) It’s being plugged as “temporary” and people are having a hard job believing it. In other words, it’s 1991 mark 2.

Am I being unfair? Well, maybe, but I really do get the feeling that AFCW thought that it being Merton people would jump with open arms at it. Except that they haven’t – in fact, uneasyness (severe in parts) is the order of the day. The whole thing has left more questions than answers – why is Ks suddenly not good enough? Are we going to be at T&M for the next three years or longer? Temporarily? Permanently? How much is it going to cost us? Why haven’t other grounds like Sutton and Carshalton been considered? What’s Merton Council’s role in this? Who’s going to get the money from the bar etc? All these questions except the last one (answer: Uncle Ron) have yet to be answered, and given that this whole thing seems to be in very advanced stages is fast becoming a situation akin to WFC and Dublin under Hammam or MK under Rent Boy.

The biggest bone of contention of all seems to be the lack of consultation the fans (ie the club’s “owners”) have got over this. Comments have been made – not by me before I get slagged off for it – that having this open day, then an open meeting all before the Ryman’s deadline stinks of a fait accompli. That is not a good state of affairs if true – if there’s one thing that AFCW was not supposed to have happen is for the same mistakes over communication as the old club had. Once again, people are having to wrangle leaks from sources just to find out what is going on. As it stands at the moment, we really are no further forward in open-ness than we were under Hammam and Koppout : wonder how long it will be before (a) questions about AFCW’s motives are raised and (b) resignations are called for? Remember what we’ve been through in the past. 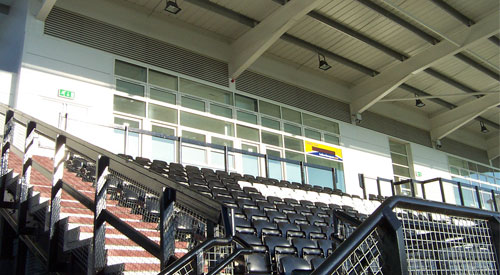 I haven’t mentioned yet about what I’ve heard about T&M chairman John Buffoni – probably best not to, unless I want to get sued, but what I can probably say is that he’s changed his tune about us pretty damn quick. Hmm.

So, what ways can this be resolved? Firstly, and certainly most desirably, the owners of the club should be allowed not only to have their say in a meeting but in a proper vote, with all options explored and explained. That’s what the DT was set up for, wasn’t it? The results may not quite be what everyone desired or indeed expected, but then that’s the chance you take with democracy. I’ve heard either us buying out T&M or indeed Ks – personally, I’d go for Ks, I just like it better, and even buying it out wouldn’t prohibit us from returning to our own Merton ground. Hell, T&M sold Sandy Lane and what’s to stop us selling it to Ks? It could well be out of our hands anyway – today, some locals were worried about car parking, and permission has not yet been granted by Merton. Have AFCW put too many eggs in one basket?

Couple of other thoughts : people really aren’t trusting Merton Council again, the general concensus seems to be that they will abandon us if we move to T&M. Having seen first hand at SW19 Towers what Richard Rawes can do (no Mr Rawes, memories are long around these parts), his involvement on T&M press releases should cause one to stop and think. Now that MK and the local elections have gone, we seem to be surplus to their requirements. Merton itself badly needs another T&M type complex, from memory the last two major leisure facilities built in the last 25 years within SM4/SW19/SW20 have been the Canons and Imperial Fields – both in Mitcham (I’m not cynical enough to suggest that Mitcham is where Merton get most of their councillors from). The baths at Morden are from the 1960s or so and as for Wimbledon Leisure Centre…….

One final thing about all this – if you think I’m not playing ball over this whole thing, if you think I’m being somewhat self-centred about this, I’ll just mention that the stubborn-ness many are showing over certain situations was a major catalyst for the setup of AFCW in the first place.